Hi Everyone.  Happy Saturday.  It's my pleasure to host the Paper Players challenge this week and I have a sketch for you. 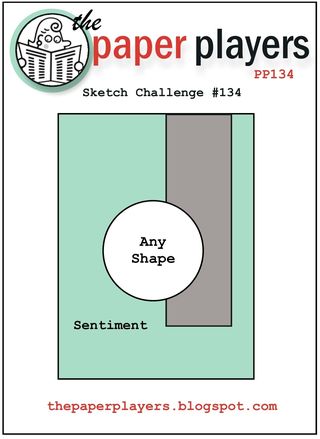 I spent 4 hours pfaffing around trying to make a card.  I swear, my crafting desk looked like my crafting cupboard had exploded all over it!  I started 4 cards and didn't finish one of them.  I had 8 different DSP's on my desk.  5 different stamps.  A plethora of card stock... it was an absolute mess.  I have no idea what happened!  In the end, I packed everything away, cleared my desk and went and had some soup.  I really needed to step away and try to get myself sorted.  Generally, I know exactly what I am going to do.  The problem was... I had the sentiment in my head and I realized that you can't design a card around a sentiment.  Well at least I can't!

I came back an hour later and still pfaffed!  Lou eventually said to me.... "look, you have all of these cards started, finish them and then decided!"   My husband, dear followers, is a genius!   I finished two and scrapped two, but, I was really happy with the two that I finished.

I  had seen an MDS stamp brush set called Lucky Frameable and knew immediately that I wanted to create a word art project with it to celebrate my Irish ancestry.   BUT.. I decided that it had to be good for me that just that.   Here's what I came up with: 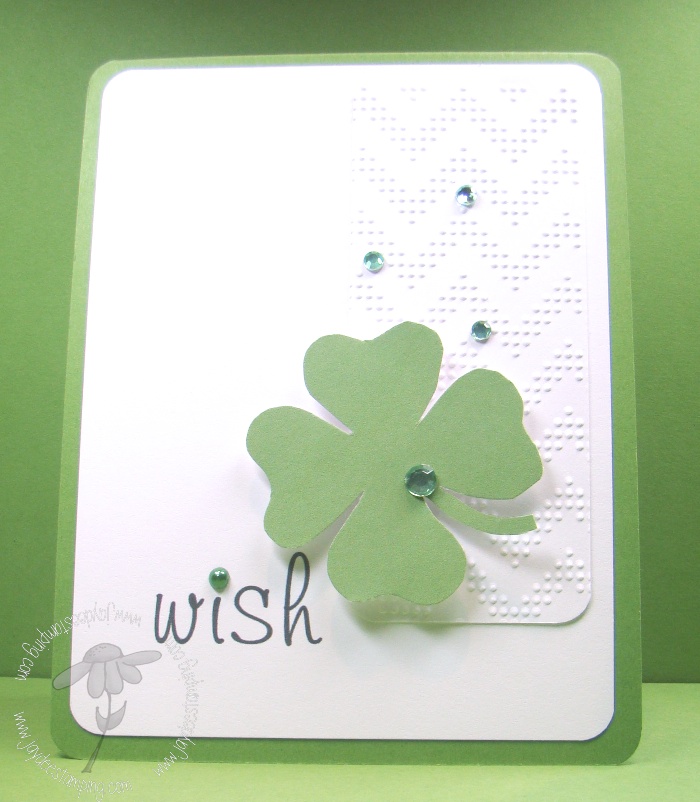 I took another piece of Whisper White card stock and ran it through a new chevron/dots embossing folder I recently acquired.  I decided I wanted some texture underneath the clover and not to use DSP, which had been my initial thought.

I popped the clover using dimensionals and all that was left was to pull out some pearls and gems that I had in my stock and place them on the card.

I love that the "wish" sentiment, along with the clover, can be for many different occasions and that made this set more flexible than just a St Patty's card.  Oh.... I must admit, I think Gumball Green is a perfect color for St Patty's cards!

Now, check out what the design team have created for your inspiration.  I hope that you decide to join us and play along.

Well, I had intended to post a card last night and offer up a little blog candy.  However, towards the end of the afternoon I started to feel very queasy.  In the end, I found myself staring into parts of the porcelain fitting in our bathroom that I don't generally see! :-)  Yep, a 24 hour bug.  Consequently, I didn't get anywhere near my PC to do a blog post!  Luckily I am feeling much better now!

On Thursday night I opened the front door to pick something up off the mat that had been deposited by my trusty man in brown.   As I opened the door, I saw this THING jump off the front porch and go hareing off around the corner of the house.  I am not sure what got the bigger fright, me or it.   I realized it had to be a puttytat, but couldn't understand what he was doing on the porch.  I thought he might be hungry, especially as it has been incredibly cold.  So, I put some food out in a bowl for it.  20 minutes later I checked and all the food had gone!  No sign of puttytat though.   I added more food to the bowl and walked away.

An hour later, I went back to the office window and sure enough.... look what I saw 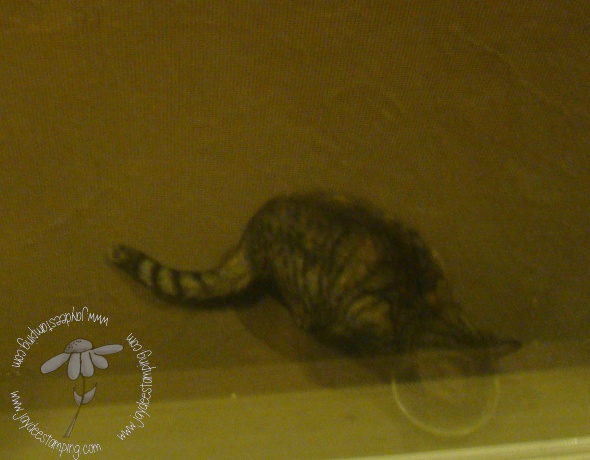 He must have been starving, because I accidently knocked the window with my camera and all he did was look at me and then continue eating.  We haven't seen him since then, but he has certainly been around as the food has been eaten.  We did try to find out where he was living today, and thought it would be easy to do that because of the snow cover.  However, all we can find are foot prints around the very edge of the house, as near to the siding as the poor little thing can get... but no paw prints coming in... and none going out... Weird!   We hope he has found himself a warm little place and he's obviously smart enough to know that there are many enemies out there including the foxes, the owls and the eagles.  So, we will continue to feed him and, if we can, we'll try to catch him and see if our ex-vet tech might be looking to add another little kittycat to her outdoor menagerie.  I'll keep you all posted!

As always, warm hugs and prayers to those of you who need a little lift tonight.  Have a beautiful Sunday

Nice card, neat-crisp look!
Glad you are over your bug. Hope Lou doesn't catch it also.
Your visitor,chose the correct house to case-out for the evening meal! Thank you for the love you and Lou have for Nature and all God's little babies.

I would have never known you used MDS! Great card and cute kitty! :-)

Hope you are feeling better. Adorable feline friend that you've made. He was lucky to have found the right house to visit!

Hi Jaydee! This is a great cas St. Patrick's Day card! I love the subtle chevrons and pop of the gems.

My daughter just danced her first "reel" and "jig" performing last night with a wonderful local Celtic band. She started taking Irish dancing in August and is getting ready for St. Patrick's Day with many performances all over town. We are so excited! To say your card speaks to my heart is a BIG understatement. ; )

Wishing your new neighbor a new warm home very soon. It's wonderful you share some food for the poor little thing.

Oh, I am so happy you fed the kitty. Hope he lives nearby and is just visiting for more food! I love that shamrock and that embossing folder!

Very cute, Jaydee! I love the scattering of rhinestones! And you are so sweet to feed the kitty. Poor thing...keep us posted!

Oooooh. *That's* your visitor! What a sweet baby! I do hope he's staying warm and you guys are so wonderful to fill his little tummy. (Not that I would expect you to do otherwise. After all, you are the folks who stop and move turtles out of the road ;oP.)

What a fun sketch, Jaydee! I love how you pulled it all together. :o) Now for me to figure out what to do with it...Hm. ;o)

P.S. Lou--brilliant advice! It sounds like something Brien would say to me. :o)

Jaydee, the simplicity of this card is what makes it so lovely. I love how fresh and clean the gumball green and white are together!

Darling card, Jaydee! I love that you've used MDS for it. The extra textured provided by the embossed layer adds so much and your gem placement is perfect! Thanks for the great sketch...it's a keeper!