3/30:  Edited to update photograph of card taken in natural light

It's the fabulous Sylvia's turn to host the Addicted to CAS challenge this week and she has a great code word for us: 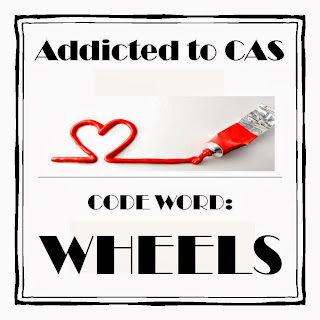 This is a code word that can take you in so many directions.... but, as my regular blog readers will know, Lou is a cyclist and is crazy about his Bianchi bike.  I had a little balsa wood bike that has been in my stash for quite a while and I decided that was a great starting point for the code word challenge.

I took the balsa wood bike and I colored it with SU markers.  I used Basic Black for the tires and the bicycle seat and Bermuda Bay for the bike.  I added a little silver pen to the handle bars, although it's pretty hard to see that in the photograph.

Once I had an idea of using the bicycle, I had to find a stamp that worked with it.  I didn't have exactly what I wanted, so decided to start up by trust My Digital Studio and use that!  I created my own sentiment and highlighted the "wheel" word in Bermuda Bay to match the bike - and the base of the card.  I positioned the sentiment on a piece of Whisper White card stock and used a PTI tag to cut out the sentiment. 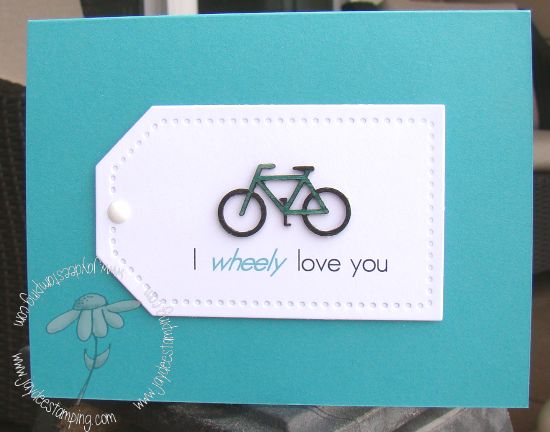 I decided to keep the card base without any embelishment to allow the focus to be on the bike and the sentiment.  I hope that has inspired some thoughts of how you would use this sentiment and that you will join us at Addicted to CAS this week.  Don't forget to check out the fabulous design team inspiration cards - they really have some fabulous designs for you!  It's also the last challenge for our fabulous guest designer Karen - it's been great having her with us for March.  You can see Karen's fabulous designs at her blog

The winner of the challenge will also win a fabulous prize from our sponsor - The prize  is the rubber stamp set called "It's all about You". 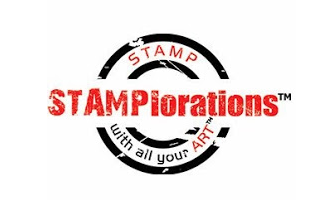 Well, the sun was shining today and at least it didn't snow!  I heard a rumor that the weather on Sunday is going to be the highest temp day we have had since the beginning of October.  I might only be lasting for a day - before we go back down into the 20s again - but I intend to relish every single moment of that wonderful warm temp.   How warm?  Apparently it is getting to 58!

This morning, we were awoken to a sound we had not expected to hear just yet - considering we still have so much snow on the ground.   A Sandhill Crane was flying overhead.  It's a sound we have not heard since Niles and Daphne left us at the end of last autumn.  It was our first sighting - or audible indication - that the Sandhills were on their way back.  We really hope that Niles and Daphne survived winter and find somewhere to produce some off-spring!  :-)   I still can't get over the fact that we live in an area where we see the Sandhill's.... they really bring us pleasure.

Last night Lou and I watched three movies and two of them are as a result of Rach's highlighting Pharell's "Happy" song on her blog.  Once I heard the song, I immediately passed it along to Lou who decided to do a little investigation and found that it had been the featured song in Despicable Me 2.  That led us to watching both Despicable Me and Despicable Me 2 last night.  That led us to discovering that our TV is actually a 3D TV.  How on earth did we not remember that we had purchased a 3D TV when we moved into our new home.  Well, once we discovered that, we had to go find a 3D movie and discovered that the Wizard of Oz was available on Amazon prime in 3D.

Now, many of you will find this hard to believe, but I have NEVER seen the Wizard of Oz.  Well, we fixed that last night and watched it in 3D and I can tell you I thoroughly enjoyed it.  We finally got to bed at 2am this morning, having stayed up to watch 3 movies - but it was tremendous fun!  So, thanks, Rach :-)

I'll be back tomorrow with my Paper Players card.   In the meantime, warm hugs and prayers for those of you who need a little lift tonight.

Gorgeous CAS card Jaydee, I love the way you added the tag with the image and sentiment on.

Spring is upon you! I am hoping all the rain we are getting here in Maine means the same for us.

Your card is absolutely charming!

Love your gorgeous bike card - it goes perfectly on your tag:) Thanks for having me along on the blog this month - I have had a ball - hugs xx

This is the cutest little bike I have ever seen Jaydee! I love the colouring on the balsa wood and the simplicity of the design. A wheely nice sentiment too!
Sylvia xx

What a cute little sentiment to go with such a lovely card.
Guess it's time for me to check the hair in my tires and dust off my bike and start riding again now that the weather has been half way decent.
I have to admit; I have never watched the whole movie The Wizard of Oz; parts of it but not the whole movie.
Take care you 2 and have a wonderful and enjoyable weekend.

Going to be in the 80's tomorrow so think of me as I'm pulling weeds out of my iris and rose beds. All volunteers welcome and have free weeds for the pick'n.

Love that tiny little bicycle on the tag :) perfectly CAS :)

Very cute bike! Whenever I see you make a bike card, I think of Lou. :o)

Isn't that the most delightful song? It makes us have a little dance party in the living room every time I play it. :o) Ellie refers to the two Despicable Me movies as "Gru" and "Funny Gru". She loves them so much. :o) Glad to help out! Also, VERY glad you corrected that "Wizard of Oz" oversight. 3D TV? Okay, now THAT'S thrilling to discover! The DM movies are so so fun! :o)

I "wheely" love your card! CAS perfection here! The Wizard of Oz is one of my favorite movies and I can't even count how many times I have watched it!

I'm so glad to hear you had some sunshine! It has been dreary hear and SNOWING again today! Not the birthday present I was hoping to wake up to. lol I WHEELY love your card...sorry, I couldn't resist. :) The background color you chose just makes me so happy! Your tag and bike are really cute too!

Fabulous card Jaydee - love how the focal point is the bike, and nothing but the bike! Great sentiment. Sounds like you had great fun last night..........!

I am pleased you like the Wizard of Oz!! And the base card is such a great colour and perfect with the white tag. I love that little bike and so cool to have coloured it x