Texture for Addicted to CAS

Hi Everyone.  Happy Saturday.  I hope you all had a wonderful week and are ready and prepared for this long weekend.  I know I am!

It's the fabulously talented Vicki's turn to host our Addicted to CAS challenge this week.  She has a great code word for us.  I spent a fair amount of time thinking about what I would do for this challenge.  Texture can take you in so many different directions.  In the end, I settled on texture from stencils and then paired it with the smooth texture of card stock, a button and some silver cord.   Before I show you my card, here's the code word: 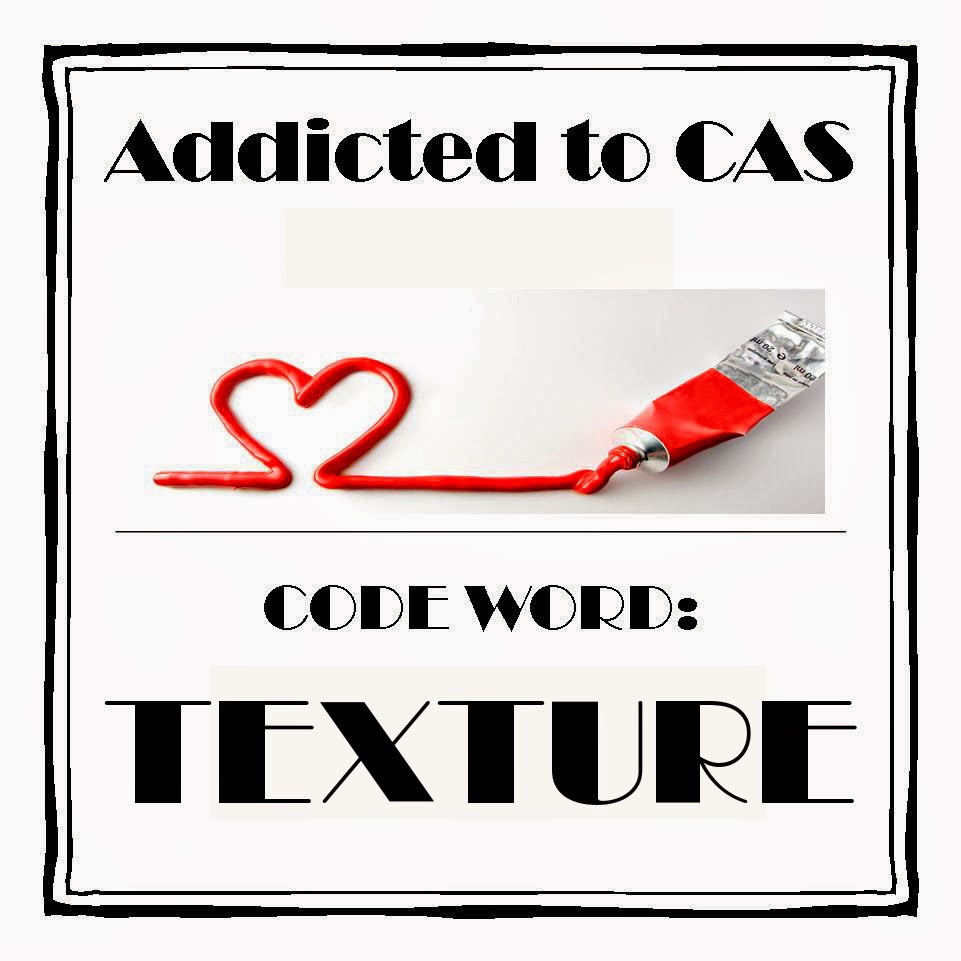 Remember, if you play along with us for the next two weeks, we have a fabulous sponsor who has donated a great prize for our winner.

They will provide 3 images for the DT to play with and donate 3 images to our challenge winner.
Please visit our challenge blog: http://scribblesdesignschallenge.blogspot.com/

Now.  For my card, I decided to practice a technique that Tim Holtz showed us in the onlinecardclasses watercoloring for card makers.  It was all about inking up a stencil, spritzing it with water, and then laying down the stencil onto water color paper.  I played around for a little while, before deciding on a gender neutral color scheme of oranges and blues.   I used the faded dot stencil from Ranger for this technique.

I paired it with a vellum tag stamped with a sentiment from the SSS "You" stamp set.  The next problem I had was what base to use for the card.  Originally I decided on a beautiful blue shimmer card stock, but it felt distinctly feminine.  Yes... I know... blue... doesn't generally scream feminine.  But, when it's blue and shimmery, it really felt feminine.  So, I decided to go with a black shimmer instead and that way the black of the card base tied into the sentiment.  :-)  Here's my card 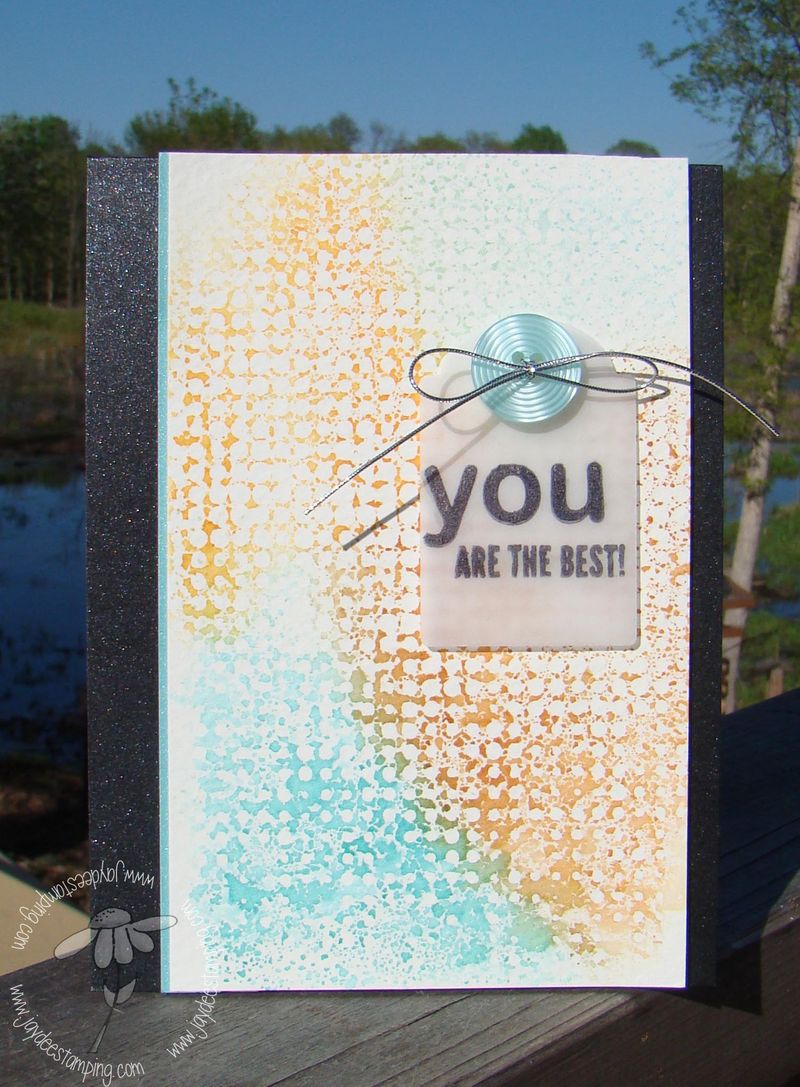 I love the texture from the stencil with the smooth shimmer of the card base and the silver cord.  The blue of the button picks up the blue from the textured background and the black sentiment ties into the card base.  In the end, I was happy with the card :-)

I do hope you will play along with us this week.  Don't forget to check out the fabulous cards created by the design team.  I promise you there is lots of inspiration for you!

SO happy that it is a long weekend.  Lou and I have lots of things to do, but the weather is supposed to be perfect!  It certainly was this afternoon.   79 degrees.  Yes.. that is 79 degrees. :-)  A slight breeze.  Low humidity.  PERFECTION!  I took the photograph of my card on the deck and it was well after 5 when I did so.  The sky was still blue and the wind didn't blow over my card.... always a very good thing!

I promised you some wildlife shots and I have to tell you, this was one time when I regretted that my camera was downstairs when I was on the deck!!!!   I went out in between conference calls this afternoon.  I looked at the wetland and thought... mmmmmm... there is something white in the wetland that isn't normally there.  However, I didn't have my glasses on, so went in to get my binoculars.   I looked out.  Shouted out some expletive.  Rushed into the house and said to Lou... "you won't believe what's in our garden"!  I rushed downstairs to get my camera, but when I came back, this wonderful creature had been chased off by three redtailed hawks and was circling above our home in the thermals. 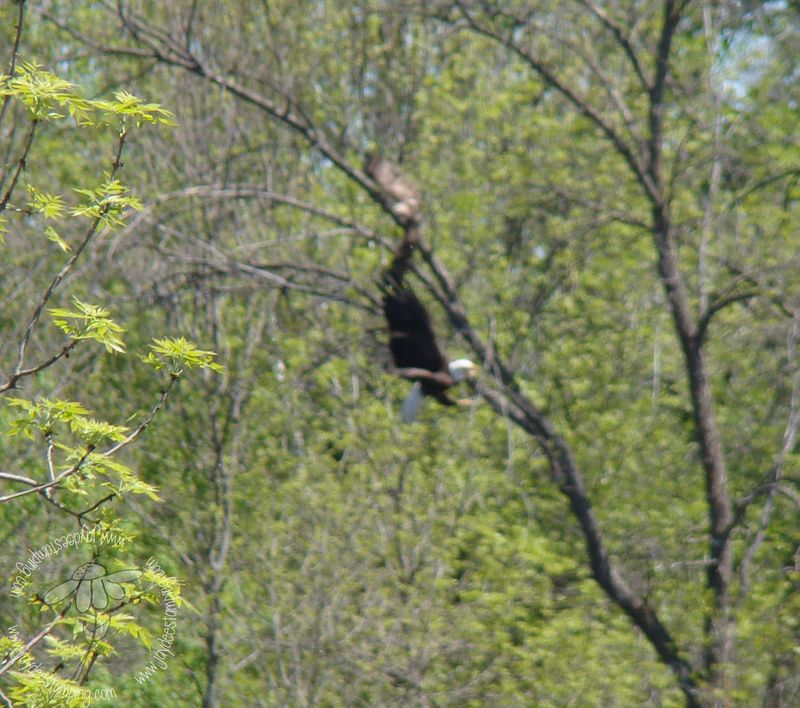 Yes..... that is... a BALD EAGLE!!!!!!  Seriously.. Can I shout that louder!  A BALD EAGLE in our back yard!!!!!  I was stunned.  When I first saw him, he was perched on the ground right at the edge of the water.  When I came out with my camera, he had flown up in the tree.  However, the redtails were not going to let him rest and he took off.  The next shot I got of him was this: 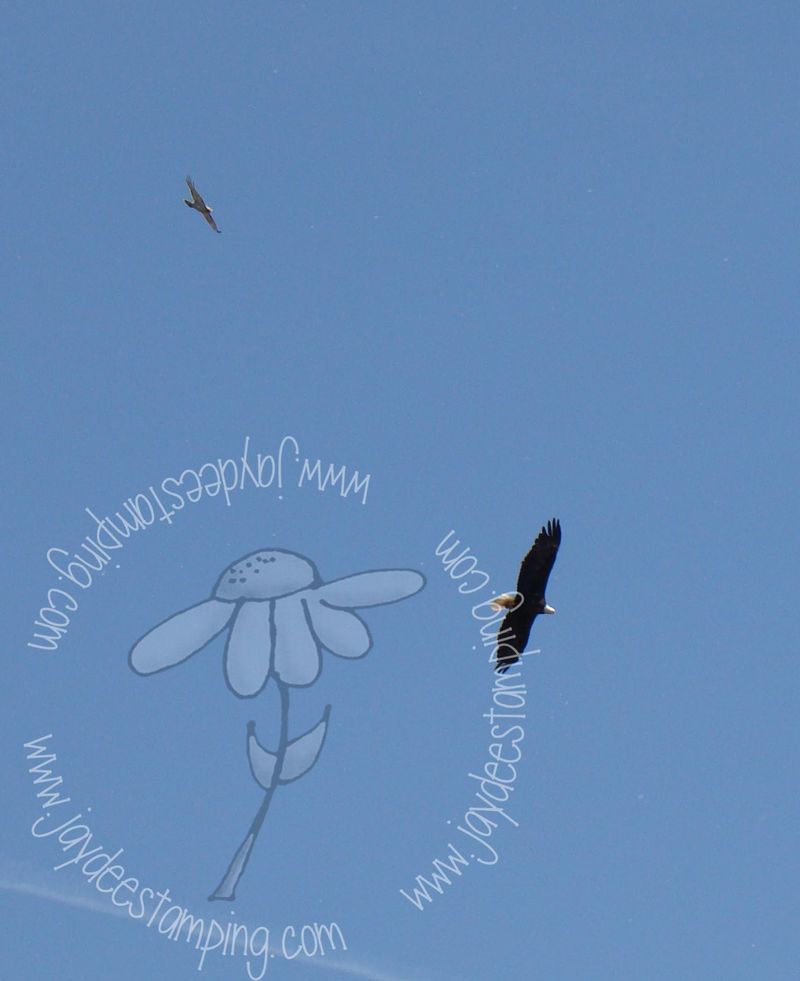 Now.. the redtailed hawk is not a small bird.... but you can see just how small he is compared to the Bald Eagle.  What  a magnificent beast!  It is so easy to see why he is the National Bird of the US.  Majestic is the only adjective to use.  I was absolutely thrilled.   In fact, I was about 5 minutes late for a conference call with my manager and his team.  I got on the call and apologized for being late and said... "Well, I'm sorry I'm late.  But you guys are no where near as interesting as the Bald Eagle I was watching in MY BACK YARD!"  Even my boss was impressed.  He said: "you know, I've had some great excuses for being late for a conference call, but none of them beat that!" Oh.  Yeah!  It beats any of the ones I have had, too!

That's all I have for you tonight:-)  I'll be back on Sunday with my Paper Player's card.  In the meantime, warm hugs and prayers for those of you who need a little lift tonight.

Jaydee, I LOVE this card. Its so beautiful!! I love the color combo. I love that technique that Tim taught us. You did an AWESOME job.

I love the textured BG on this card and of course the awesome colors :)

Not only a fabulous texturised card love the use of the stencil btw but a bald eagle and in your yard too !!! Both amazing.

The colours, the texture - everything about this fab. card design blends together perfectly. Love the sparkle too!
WOW to the Bald Eagle pics Jaydee - we have Red Kites in this area, which are pretty awesome, but a Bald Eagle in the back garden is out of this world!!
Sylvia xx

Card looks great Jaydee.
Cool looking stencil and you done a super job in using it
How Awesome to see a bald eagle along with all your other wonderful creatures.
Thanks for sharing your lovely photos

Really nice background - thinking I might have to try this out... And I love the tag. You have the most interesting visitors!

While your card is fantastic, I need to gush over your bald eagle!!!! HOLY COW!!! We've been driving down the road and have seen them sitting in a field, and I've spotted them flying overhead every once in awhile, but NEVER have I had one in my backyard! I'm so thrilled for you!!!!

Gorgeous card Jaydee - love the textured glitter card, your water coloured background and sentiment on the vellum......fabulous! And so are your photographs...........fancy seeing a bald eagle in your garden - how wonderful. Just love watching wildlife - spent quite a bit of time last weekend watching red kites and we have a pair of buzzards who have nested just over the back of our garden and have one youngster amazing!

Hi Jaydee! Your background is very pretty and I love the 3 colors you used. The black sparkle paper looks wonderful on your card as well. You always inspire me!

Wow, a bald eagle in your very own back yard! Such an honor! The comparison of the two birds really makes me appreciate him even more. Majestic is right, no other adjective compares! Wouldn't it be wonderful if he set up residency in your back yard? Oh, I'd love to see him again, that's for sure!

Have a lovely holiday weekend!

I adore this card. The textured background is a must to try. It really shines.

Your eagle is majestic. We have one that frequents our yard every now and then. One time he was just sitting on the ground eating a fish. They are so beautiful and regal.

Wow! You keep getting bigger and more impressive surprises. That's quite the habitat you've got there. I'm pretty excited for you, and for us who get to experience your nature wonders vicariously. Thanks for sharing, Jaydee.

I'm a HUGE fan of birdlife, so your card sort of "flew" out of my mind once I got to the bald eagle part of your wonderful post, Jaydee! What a thrill!! I'm not even sure I would have been able to move and get the camera! Good job and thank you for sharing!! I was only kidding about your card. It's too superb to forget! You absolutely rocked the TH Technique from class with this gorgeous card!! Hugs, Darnell

Hi Jaydee. LOVE your card ... this is one of my favorite techniques from the class ... so easy, but oh-so effective. Great combo of colors too! Love it paired with the textured button and vellum tag - awesome design.

What an amazing creature you had in your back yard! I love the pic of him soaring through the air. We have several bald eagles that come for a visit in our area, and it's always a treat to see them. Have a great long weekend! Loll xx

wow Jaydee this background is awesome! I love the textured look and the embossing on vellum, just perfect x

ABSOLUTELY LOVE what you did with the spritzed stencil! I am so going to try this~ I love the end result and your card is FABULOUS!