It's the fabulous LeAnne's turn to host our Paper Players challenge this week and she has a theme challenge for us. 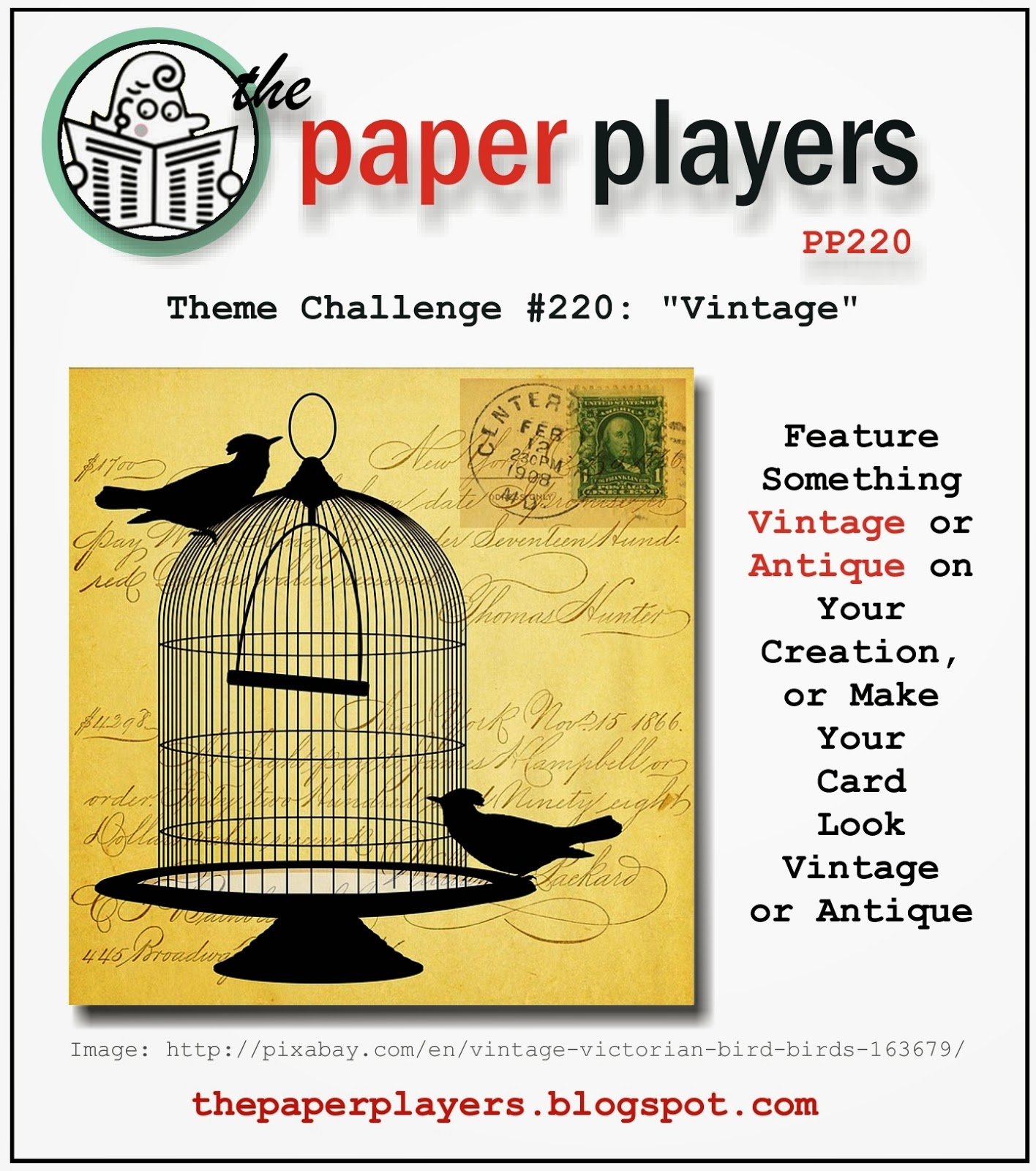 Well, we all know that vintage isn't my style, so this challenge took me a little out of my comfort zone.  I really wish I was more like LeAnne.  She manages to move between vintage, CAS, bold and shabby chic with an amazing ease. Me?  Not so much so!

I did remember that I had received some free papers a number of years ago when I bought a British stamping magazine and realized that they had a vintagey feel and would be perfect for this challenge.  I hadn't intended to make a Christmas card but, as the papers were Christmas-sy - then a Christmas card it would be. :-)

I began with one of the pieces of paper and ran it through my Big Shot with a tag die.  I backed it with some of the Stampin' Up! Vanilla coaster board as the paper is printer-paper thin and I knew it wouldn't hold up as a tag on the card.  The coaster board gives it a little heft and means that it will survive a trip through the postal system!

I then used my stitched rectangles die to cut out another piece of the paper and adhered it to an Always Artichoke base.  I used yet another piece of the paper and die cut some holly leaves.  It's rather a pretty music themed paper, but I needed something more, so stamped the leaves from the accompanying stamp set over the die cut.  All that was left was to stamp the sentiment in Antique Gold embossing powder and add some sparkly berries.  Here's my card: 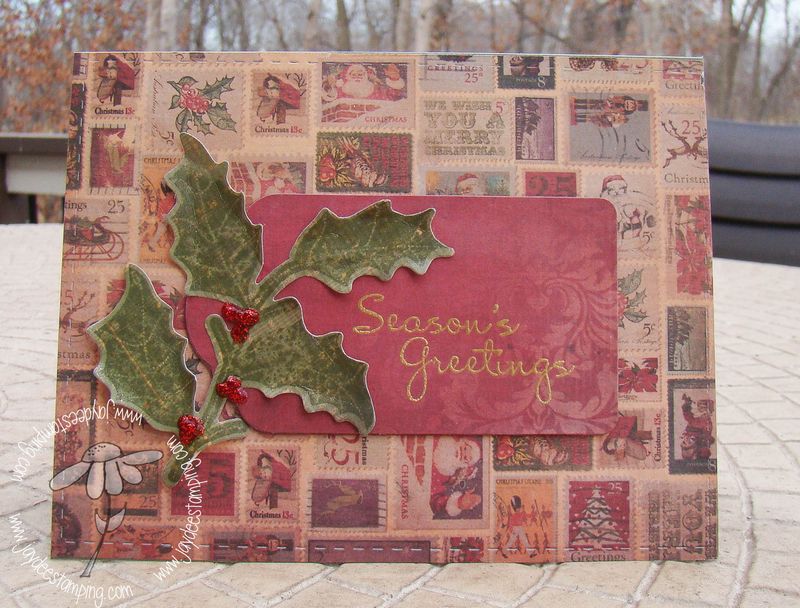 When I adhered down the leaves, I made sure not to glue up to the edges so that I could curl the edges of the leaves a little.  I think it adds just a little bit more interest.  Once I had completed my card I realized that the leaves were a little too "flat" and that holly leaves are shiny, so I took out my Wink of Stella glitter pen and went over the leaves to give them a little shine!

The design team have created some fabulous cards again for your inspiration this week.  I hope you will pop along to their blogs and then come back and play along with us.  We'd love to see what you create this week.

It's cold and bleak and windy and I'm beginning to feel like I am back on the Yorkshire Moors.  The leaves have all gone off the trees and the fact that we can now see the houses down the street from the back of our garden reminds me of why we put in the fabulous River Birches earlier this year :-)  Mind you, we aren't out in the back garden much in winter, so privacy isn't as much of an issue.  It's the time of year when we change out the curtains and pillows to warmer tones and put away the cool greens knowing that we won't be taking them out again for at least 6 months!

I was saying to Lou this morning that I think I am at the stage in my life where I need to live in a place where winter doesn't last from the end of October through to May:-)  He wanted to put away the furnishings in our screened in porch but, I looked ahead to the weather and found it was going to be in the mid-50s for a couple of days next week...... warm enough to spend 15 minutes or so sitting in our porch :-)  I know that we will have to put them away after that as the temps will be getting to 40 as a high.  Now that is just a little too cold to sit outside :-)

We have had multiple visits from a rafter of turkey's these last few days.  I managed to get a shot of a couple of them this afternoon when I was photographing my card.  They really blend into the fall colors of the grasses and are loving eating the seeds from the flowers and grasses that we planted. 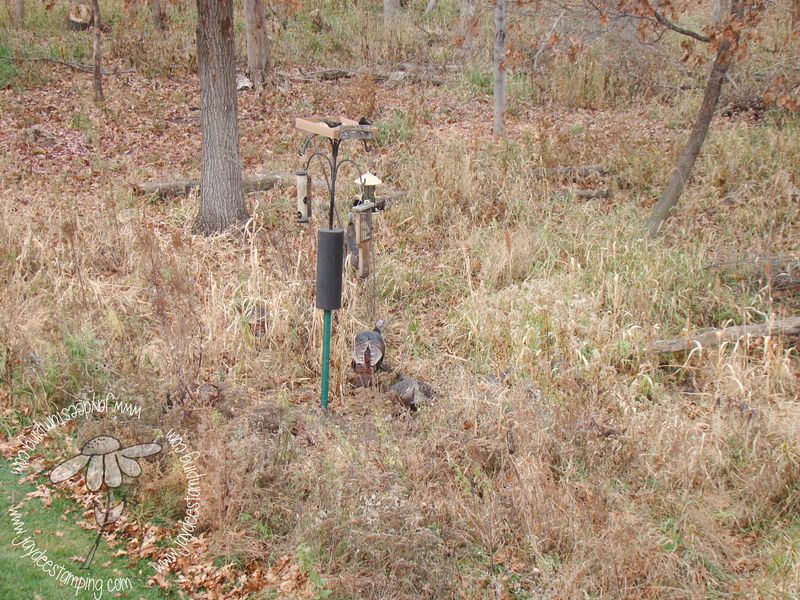 When I went into the screened in porch today to let the cats have a run, all of the cats - including the 20# big girl's blous Bailey run in the opposite direction of the turkey's and pretend they don't exist.  Not Charlie.  No.   He saw them and took a running jump towards the screen as they weren't too big for him!!!!!  Even though he is considerably smaller than he, they decided to do an exit stage left :-)

I'll be back tomorrow with an update on the Cards for a Cause card drive.  In the meantime warm hugs and prayers for those of you who need a little lift tonight.

Jaydee, I am with you -- vintage is not my go-to style and I need to work hard at it. YOUR card is fabulous! I love the vintage feel to your background patterned paper, and the colors in your card are gorgeous. Your story about winter and the turkeys also rings true to my heart...it is cold and rainy today and it gets dark earlier and I'm already looking forward to spring!

Love the background paper you used Jaydee - just perfect for this vintage style. It's not my natural style either, but I think you totally made it work with this card - even the holly has a real vintage feel to it. A great vintage card!

Whether it's your style or not, you certainly made it look like your own! Perfect blend of papers, images and font to illustrate this challenge! (If it makes you feel better, I had a hard time too, lol!)

Rach, saw your photos on your post yesterday, it really seems as though the CW was even more glorious this year and it seems that fall has been much longer in VA than it was here. Im looking out of the woodland and there isn't a leaf to be seen!
Hugs
Jaydee

Thanks, LeAnne. Yeah - it does look Holtz-ish... I need to check the make but it came as a freebie with a UK crafting magazine... It was a really lucky thing for this great challenge. Love that you pushed me out of my comfort zone.
Hugs
Jaydee

Laurie, thank you... the DSP really was a lucky find in my stash! So glad you saw a rafter of turkey's, too. What surprises me is the range of noises they make. We heard them making noises this week we haven't heard before and I love how they talk to each other across the stretch of our woodland. Isn't it fabulous that we can now take photos on our phones!
Hugs
Jaydee

Thank you, Claire. Vintage isn't a comfortable style for me. Luckily I had this great DSP :-)
Hugs
Jaydee

Colleen.... funny you should make the comment about turkey's and November:-) The first time we ever saw a rafter of turkey's was on Thanksgiving a few years ago. We said that they came to our house because we were vegetarian :-)
Hugs
Jaydee

You have a great DP for your Vintage card Jaydee and I adore the embossing in gold on red paper and nice leaves there..looks like an old leaf...and nice add of the red glitter on the laeves, I ADORE YOUR CARD.. I am sorry I just have time to visiting the DT member cards all are adorable..and now I visiting you today :-)

I try to make vintage card again this time..my entry is #6 if you have time to visiting me back and maybe leave me some love too I would be soo thanks and happy...big hugs, Monika from Germany

I am delighted with your choice of papers...it almost looks Tim Holtz-ish, but whatever it is, I LOVE IT! The holly leaves & berries are a wonderful touch! Thanks for the wonderful interpretation of my challenge, Jaydee!