I hope you all had a wonderful Christmas and that those of you living down south - and that includes you Colleen - are safe from the terrible storms that have whirled around you.  Here in the Northern Suburbs of Minneapolis we have been spared much of the terrible weather.  The only thing we have is a lovely carpet of snow on the ground.   We were supposed to have been hit with around 10 inches yesterday, but we ended up with less than half of that.  Unlike so much of the country, we were really lucky!

As I haven't been able to post for a couple of weeks, I wanted to share some cards that I made for Christmas.   This post is taking me quite a while to type up as, about 10 days ago, I was trying to catch our cat Chester to replace his "calming collar".  He weighs in at 18# and can really move when he needs to.   I was standing in the passage way trying to catch him when he decided he saw a gap between the fingers in my left hand.  For some reason, the silly cat decided he could squeeze his 18# body through the gap between my ring finger and long finger and he was running as fast as his little legs would carry him...... needless to say, he won and my fingers lost.

Consequently, I tore the extensor tendon in my ring and neighbouring two fingers.  The ring finger is the worst off as it affected 3 of the digits.  The other two fingers only have the digit closest to the palm affected.   Right now I am unable to bend my ring finger at all and the other two fingers have limited movement.   So doing anything - including fastening my bra... yes, it's the little things that are the most inconvenient - are very difficult.  Of course, this means that I cannot craft and typing is exceptionally hard as I pick and roll my way across the keyboard with a single hand and a single finger on my left hand!

I wanted to take a couple of days break from crafting and blogging - but didn't think that Chester would be the provider of that break...and then some :-)

Here are a couple of the cards that I made to send out for Christmas.   I know that you have seen several images made from this first set, but I couldn't resist sharing another one with you.  I paired some old DSP that I got many years ago with my new image and I love the warm, rich tones that it produced. 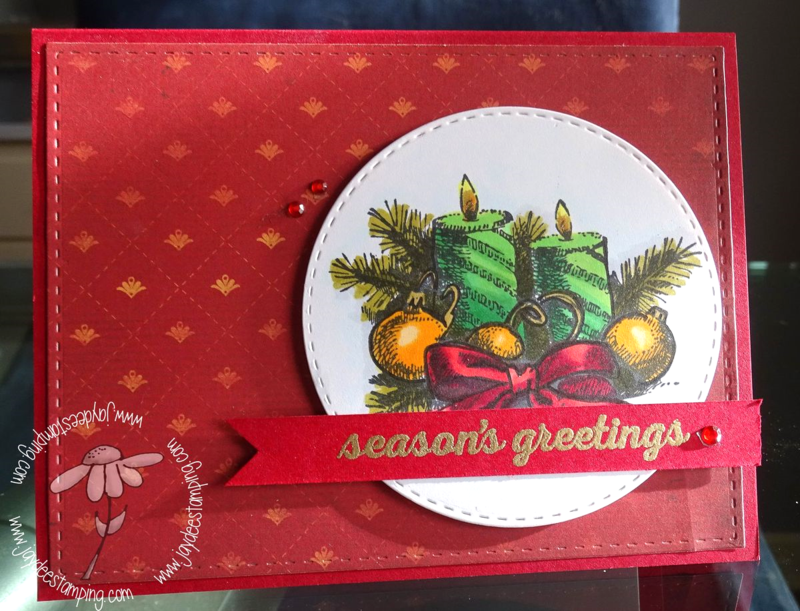 The second card is very different and much more whimsical and I love it.  I had such fun with some expanding "snow" that creates texture on the Santa.

I'll try to get back tomorrow night with more cards to share with you.  In the meantime, I really appreciate your patience as I deal with this little "incident"!    I can't tell  you how much I am looking forward to getting back into crafting in a couple of weeks.  I think there is nothing like a forced "vacation" to make you realise how much you love doing something!

In the meantime warm hugs and prayers for all of you who need a little lift tonight.

Hope you are feeling better.
I'm right handed and torn the tendon in my right thumb. I can't open the door knobs, or jar an bottle lids. Still painful and happened in Sept.

Oh my Jaydee, so sorry to hear about your hand injuries...those darn pets of ours can really send us for a loop can't they? I hope you are on the mend soon and able to see about some craft therapy asap! Despite all that, Happy New Year! ((Hugs))

2 very beautiful and great looking cards.
All well here. Few scary moments and sleepless night but faired pretty well compared to so many who have lost loved ones and their homes.
Wishing everyone a Very Happy and Healthy New Year.

First off, so sorry to hear about your hand! And what a way to injure it! Hopefully you have the chance to rest it and allow it to fully recover.

Your cards are beautiful. I hope the recipients understand how special they are. Just beautiful. Who wouldn't love to get one of those beauties in the mail!

What is expanding snow ? I love that look on santas beard and coat ... How super adorable ... Thanks Jaydee for sharing .. Hope your Christmas was a Happy one and even a better new year.2016.. P.s. We to have had the worse weather .. Just Strange as all get out ... Prayers to all who are suffering . Hugs Anne

I too am sorry to hear you are injured! Best thoughts and wishes for a fast and complete recovery. Sending a hug to you.

Oh Jaydee I am so sorry to hear about your injury, this time of year especially. Those darn cats! Both of your cards are great. I am the happy recipient of a card made with the first set and it's just such a gorgeous image. Best wishes for a speedy recovery, my friend!

Oh Jaydee, that's a lot to deal with! I'm lifting you in prayers for healing. My sister is a hand therapist, maybe she can offer you some tips. ; ) My yellow lab that passed away in July had a nickname that might be fitting for Chester..."Big Naughty"! Ha ha! Your cards are gorgeous, as always. The regal colors of the first and beautiful coloring of the second are outstanding! You're in my thoughts~