I hope you are all having a great week so far.  Me?  I am so looking forward to the weekend :-)

I created another card using my new Stamp of Approval set.  The Enchanted Garden set is from Sugar Pea Designs and I noticed that they were having a sketch challenge and that this new set would be perfect for it.  Although the set comes with dies, I decided to fussy cut the flowers instead.  I know it takes longer, but I do find it relaxing and very satisfying to do some fussy-cutting! 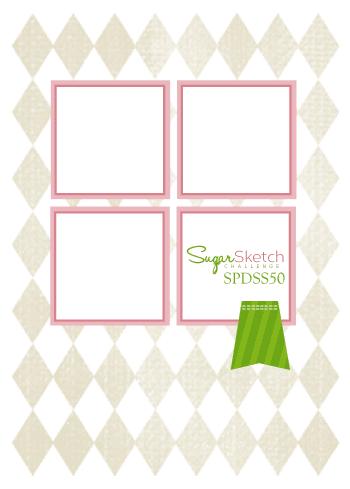 I used my Stitched Square dies to die-cut the four squares and then placed them together so that I could stamp the leaf elements across them.  I stamped the flowers onto Neenah Solar White card stock and colored them with my Copic Markers.  I wanted the middle of the flowers to have some texture so got out my Irresistibles Black enamel and left it to dry.  Once the enamel was dry in the middle of the flowers, I used my Wink of Stella pen on the flower petals for a little extra shimmer and shine. 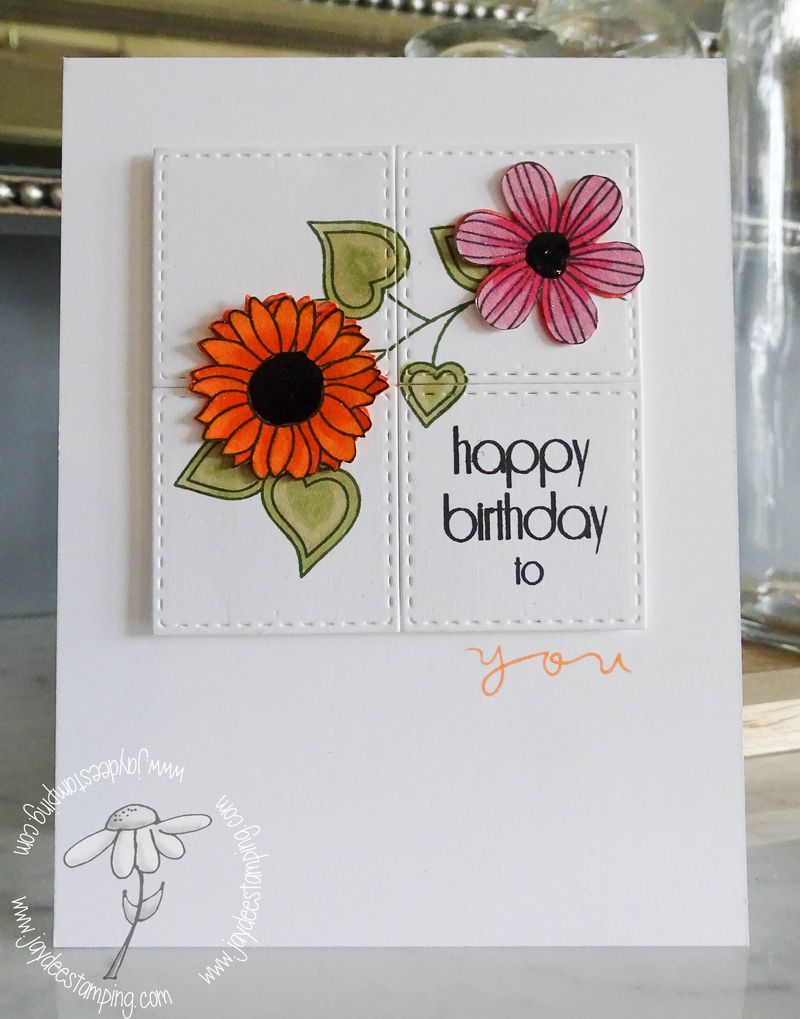 OK... what happened to Spring?  It's currently 41 degrees and raining with the possibility of it turning to snow overnight!  Goodness knows I like the snow... but seriously..... from October to late April is getting really old :-)   BUT... on the positive side, our wetland is looking like a wetland again and there are water pools everywhere with frogs trying to find their mate.  However, I think they will be quiet tonight because it's so cold.

I thought I would share a couple of photos from our recent trip to the UK.  This is of Haddon Hall.   Haddon Hall is fascinating.  Parts of it date back to the time of William the Conquerer - which would be the 11th century.  It's considered by many historians to be the finest example of Tudor architecture still surviving today.  It has been restored to it's original state and the current owner wants to keep it as a living museum.  It isnt as grand and over-bearing as it's near neighbor - Chatsworth House - and, for that reason, I actually prefer to visit Haddon Hall.  There is something so amazing about walking around the rooms that look today as they did in the 13-17th century.   It was pretty cold the day we were there and we were standing with our backs to the massive fireplace in the hall - just as others had done before us... the same fireplace, the same hall, the same stone flagged floor.... for 700 years.   It was a pretty amazing feeling!

We toured the house - without a guide - and found the kitchens to be one of the most amazing parts of the Hall.  There were interesting signs around the kitchen

This sign put a whole different meaning on "it's a dog's life!' 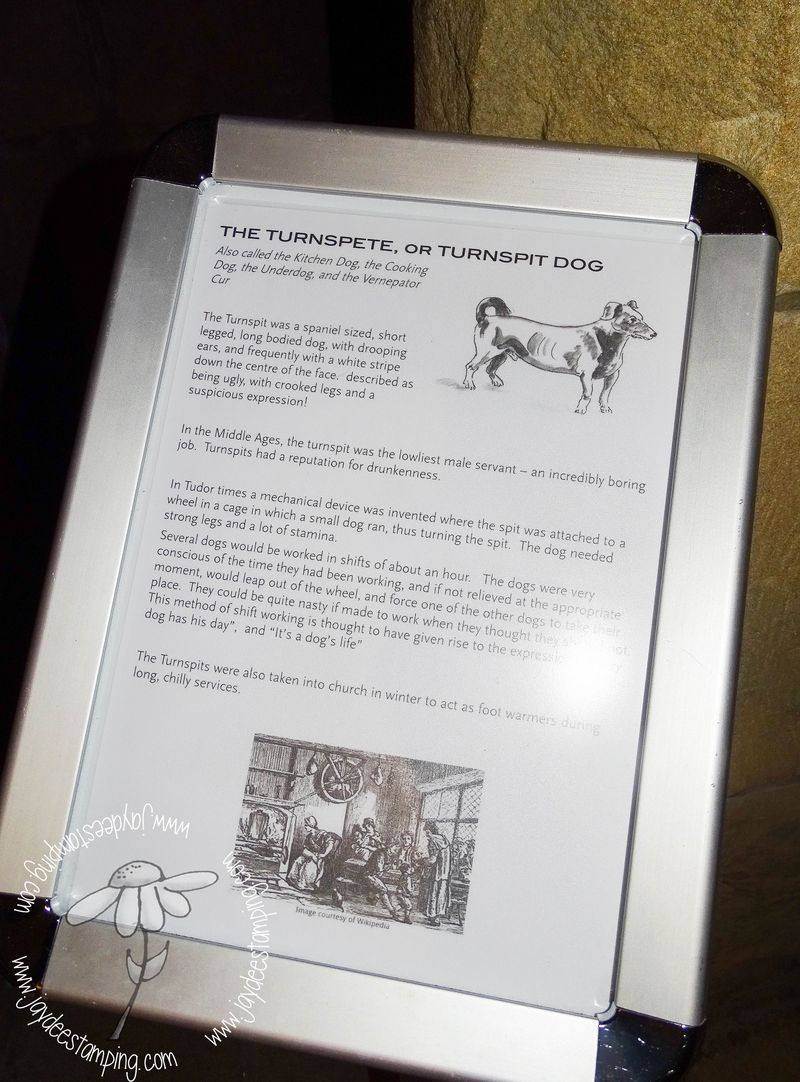 Isn't that fascinating?  I'd never heard this.   Talking of the kitchen.... it was the stairs from the kitchen to the cold room that absolutely fascinated all of us.

Check this out...... imagine the thousands of steps over the centuries that had to be taken to erode the stair in such a way.  It's been eroded about 10 inches and the hollow is just perfect for a single foot to fit inside.  I stood with my foot in that hollow and just imagined the thousands of people who had gone before me and what their daily life would have been like as they moved quickly and efficiently backwards and fowards between the two rooms. 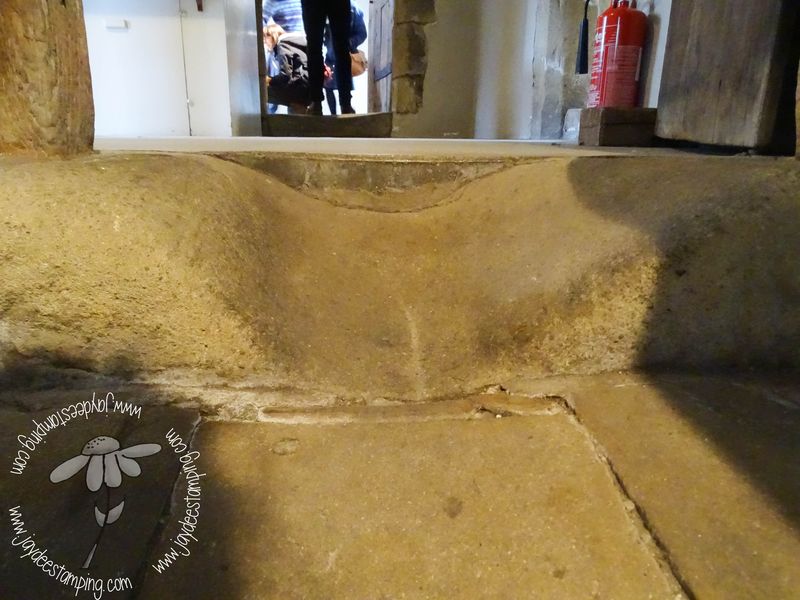 The step has worn down in the middle all the way to the floor.  Amazing!

This table in the great hall is over 500 years old..... as is the tapestry behind it! 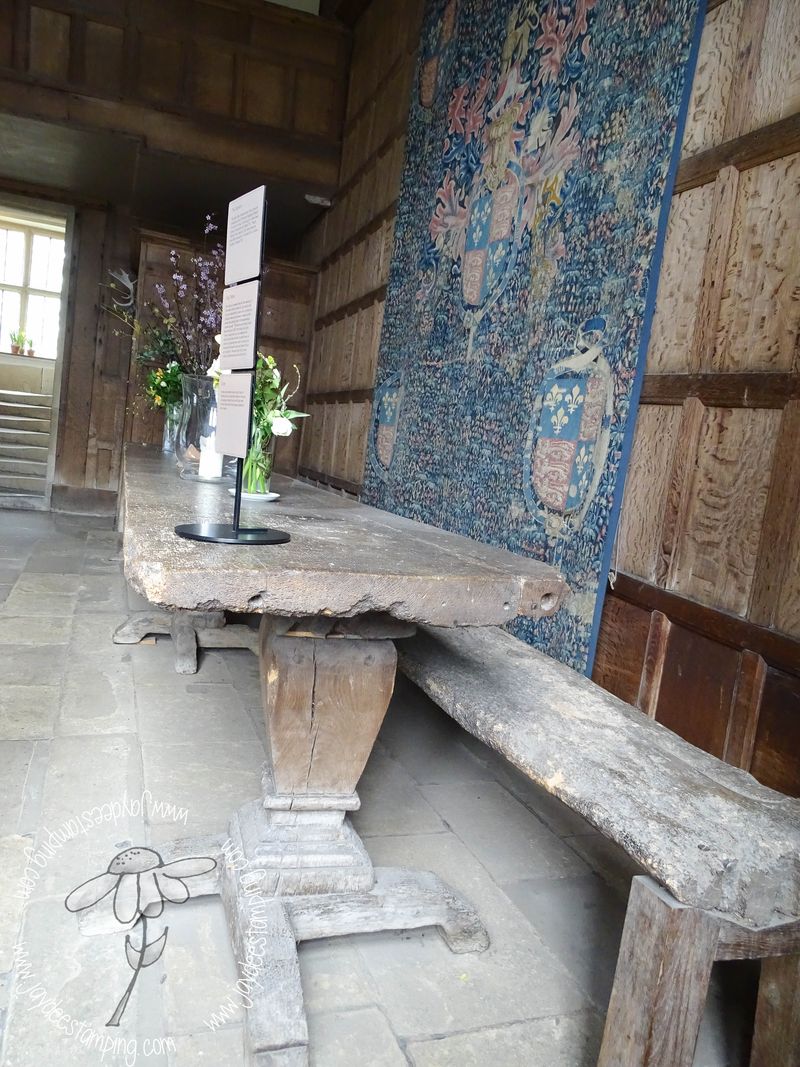 Here's another little snippet from a sign in the kitchen: 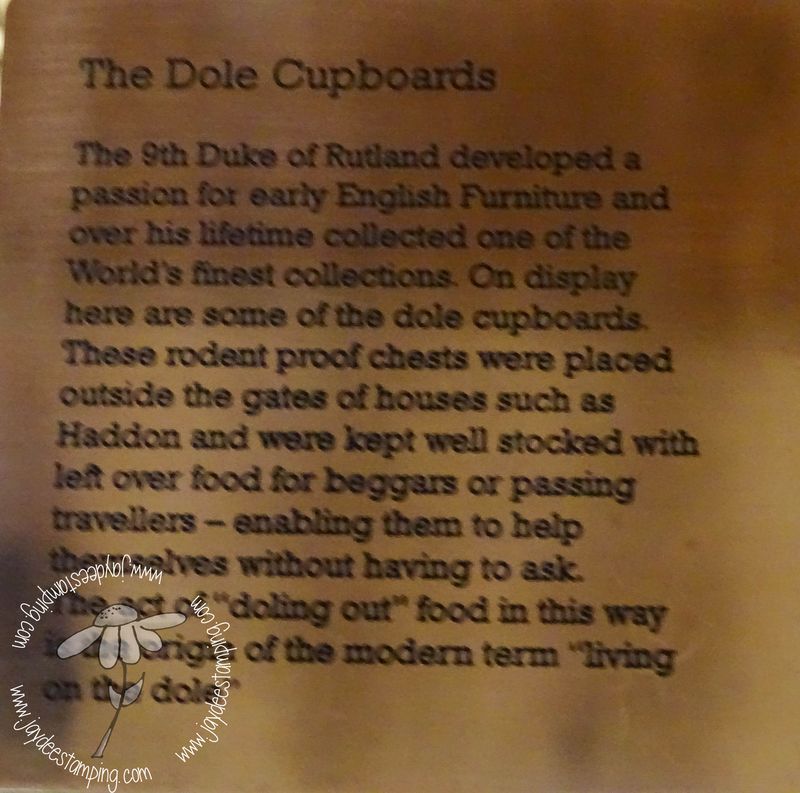 I never knew the origin of "on the dole" either!  Amazing the things you learn when you travel :-)

I'll be back with another card tomorrow and some more photos.  In the meantime, warm hugs and prayers for those of you who need a little lift tonight.

Great post Jaydee! I'm fascinated with history and loved reading about Haddon House. You've got me thinking about those poor dogs turning the spits .. our dog is so spoiled she just naps when I'm cooking LOL! I love your card - it's made me rethink the sketch - clever to use the four squares for a background!

Jaydee~ I really love your card. It's colorful and so well designed. TFS I agree with you about this weather! Oh, and thanks for the history lessons and photos; have always wanted to go to England. :-)

Hi Jaydee (waving)!!!! It has been SO long since I have "seen" you! I am thrilled that you played along with us, sharing such a pretty flower card. Fussy cutting IS relaxing, isn't it!!! A trip to the UK! Wow! Sounds like you had a fabulous time. I am glad! Hugs to you and thank you for playing along. xo