Beautiful World for Case This Sketch

I had some fun this weekend playing around with my Stamp of Approval set.  I really did push myself out of my comfort zone buying this set of stamps, but am so glad that I did.  I also forced myself to use colors that I don't often lean towards - like neon lemon :-)

A few months ago, I really found that I was in a rut stamping wise and that I was surrounded by stamps that I had collected over the last few years based on my need to keep up my SU minimums.  I ended up with stamps that I bought "because" rather than stamps that I really wanted.  I felt guilty that there was so many fabulous stamps - but they just didn't suit my style right now.  When I went into my craft room I was just uninspired because the stamps weren't what I wanted to play with.  It took a couple of weeks to think about it, but decided that I was going to do a purge of all stamps that didn't inspire me at this stage in my life.  They were fabulous stamps from SU,  Papertrey Ink, Simon Says Stamp  and other suppliers - and I know that someone will have picked them up at the charity shop and will give them the love they deserve.

However, such a massive purge meant that I was a little bereft of stamps!  So, this Stamp of Approval kit was the thing that I needed to force me to use something different and challenging.  I really needed to do that.

I know that there are people who signed up for my blog because of the use of SU stamps and that they have decided to unsubscribe because I no longer use SU as much.  If this had been my business and they had been buying from me it would have been a problem.  But, as neither of these things are true - I hope that - even though I am not using stamps you have - you can be inspired by the color combos, layouts, etc.  I know that Colleen told me that she often gets inspired by the colors in my nature photos for her cards.  That makes me smile.

Here's the sketch from Case This Sketch: 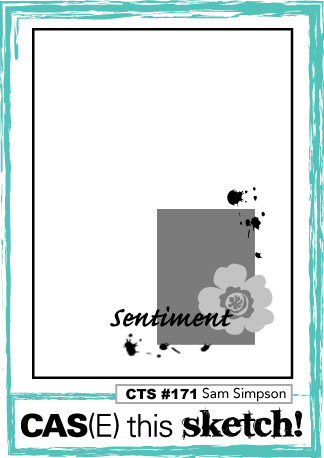 Here's my take on the challenge: 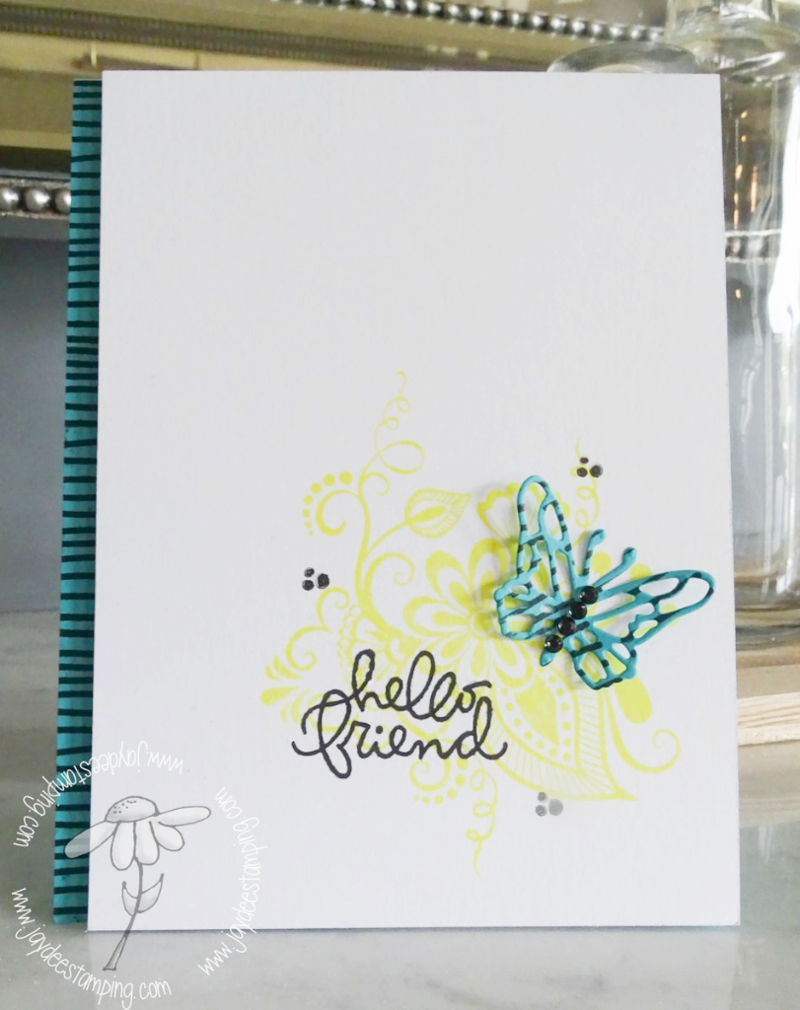 I used the sentiment and the stripes from a Simon Says Stamp card kit stamp.  I love the teal with the neon lemon but it needed a little "something something" and I thought stamping the stripes repeatedly on the side - and then on the butterfly to match.  I took some rhinestones and colored them with my black sharpie.
On a personal note:
Apart from the time that I spent in my craft room this week, I spent some time in the garden, sitting under the canopy, waiting to see what might feel comfortable enough to come out and share my space with me.  I managed to get some fabulous shots to share with you this week.
Firstly, I wanted to share a photo of the woodland.  Our Buddha statue is under the trees surrounded by newly growing grasses, trees that are popping their leaves - and some Bleeding Hearts.  In the afternoon sun it looked so peaceful and whilst I was taking this photograph I noticed a little something moving in the bottom left corner of the shot.  Can you see it? 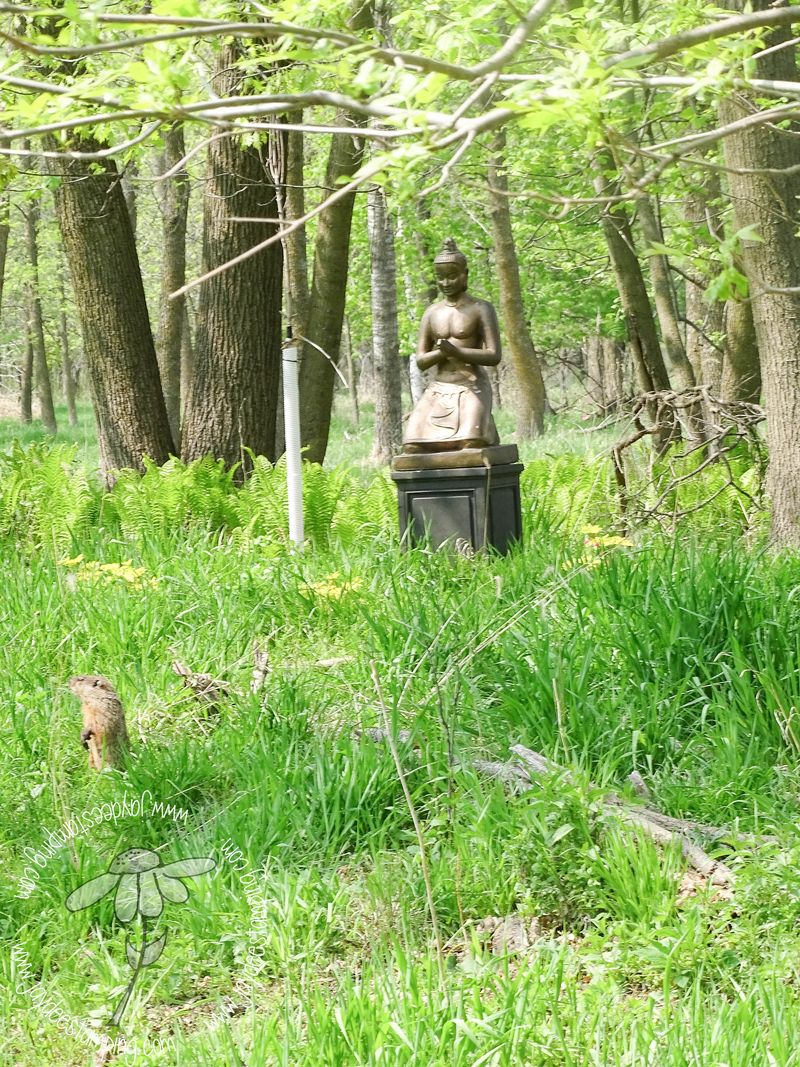 Can you see.... standing on her hind legs?  She didn't like it much when I realized she was there and moved to get a better shot.... and she tried to hide in the grass :-) 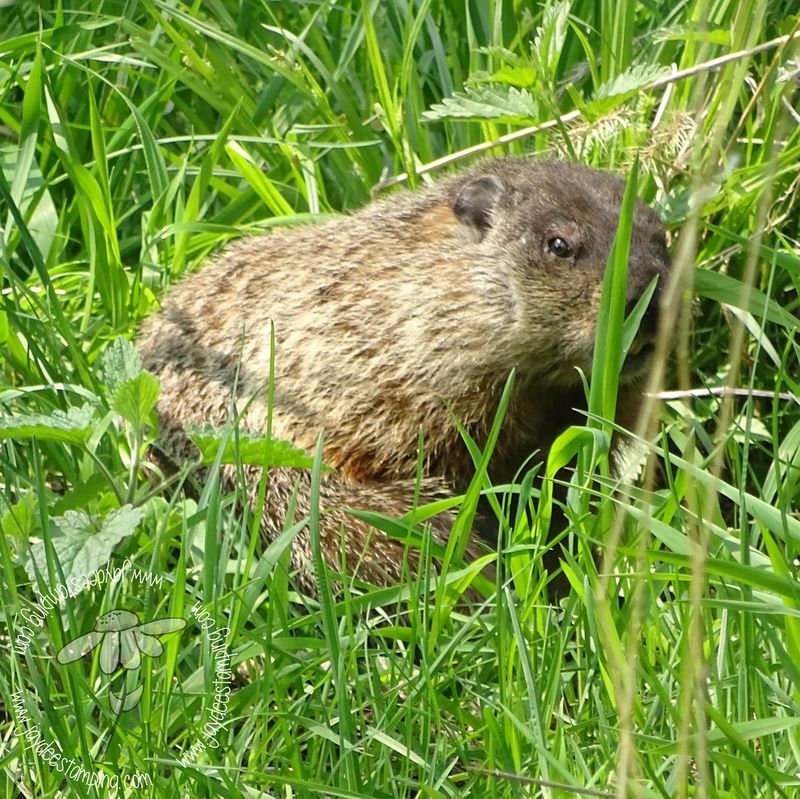 She really is an amazing neighbor.   Watching her eat is fascinating.  She goes around the plants and grasses and eats a little bit from each and then moves on - to make sure that she has more to come back to and doesn't decimate her food source.   I think there are some Goats that could learn from that :-)
Jeanette - you asked me how you could send me some photos of Australian birds.  I know our blog friends would love to see some of the amazing birds you have down under.   Feel free to either send them to me via email, or contact me and lets see how we can share them via something like Pinterest.
I'll be back tomorrow.  In the meantime, warm hugs and prayers for those of you who need a little lift tonight.
Hugs
Jaydee

Thanks again, Jaydee, for your outdoor shots. I always enjoy them. Even though I don't comment as much.
I also like your idea of the stripes and the matching butterfly. You make beautiful cards. I have a folder for your cards and another for you outside shots! God bless and this is a late comment 5/28, have a safe and happy Memorial Day weekend, to all.

Such a pretty take on the sketch! I love that butterfly!
And I love your nature shots!

Beautiful card Jaydee! LOVE all the green in your garden too!
Thanks for joining CTS!

Oh, this is so pretty! Wonderful take on the sketch!

I'm here not matter what you do! Cards, birds, cats, decor...love it all. Thanks and hugs.

Cute card. I love the turquoise striped piece on the side to match the butterfly and the yellow in the background. So pretty and simple. Love your woodland with your Buddah definitely looking peaceful.

Love the looks of your clean and simple card.
Amazing how quickly the area has greened up and from the looks of it; your cute little neighbor friend is trying to eat without being disturbed or doesn't like to be watched while she's eating :}
Spotted them beautiful ferns; something I can't grow down here due to not having no shade.
Jeanette; would love to see some of your photos as well.
Thanks for sharing your phots Jaydee.
Have a Great day and wonderful evening.

“Many eyes go through the meadow, but few see the flowers in it”
― Ralph Waldo Emerson