Quickly dropping in to share a card I made this weekend using three - yes, three - challenges :-) 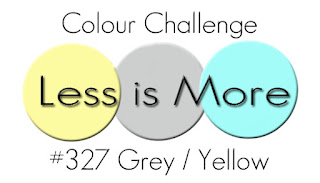 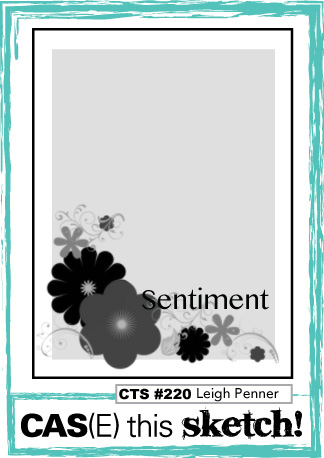 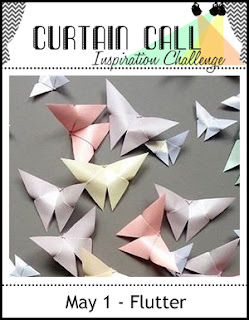 It's very rare that I get to combine two challenges - never mind three!   I love the Case sketch and the yellow and grey colors from Less Is More is one of my favorite color combos and how could I not play along with the Curtain Call theme :-)

I had this idea in my head to use the dragonfly from SU's Dragonfly dreams.    However, I wanted to do something other than florals for the corner and remembered that I had an old Sizzix die and used it to create a stencil.

I used two shades of grey for the stenciled area and then die cut the Dragonfly.  However, I used a strong vellum for the dragonfly because I wanted to give it strength and also a feeling of lightness and weightlessness.

I colored the wings and body of the dragonfly with Altenew inks - using grey and yellow.  The vellum took the color beautifully.     I used the negative piece that was left from the die cutting as a stencil and inked the space left by the wings in yellow.  I wanted to have a yellow background to make it look as though the dragonfly had two pairs of wings.

Here's a close up so that you can see - this is the side view: 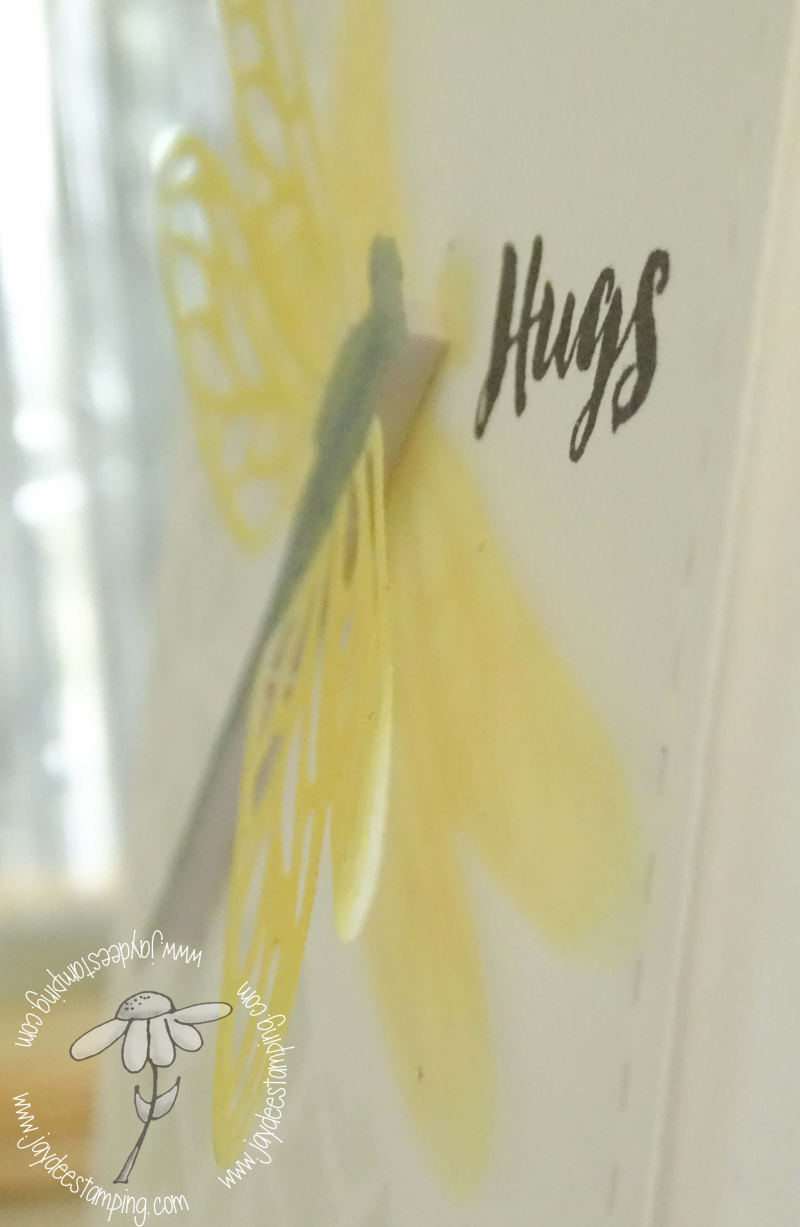 I popped up the dragonfly using the new SU foam strips - they were the perfect size for it :-)

Here's a view of the lacy wings: 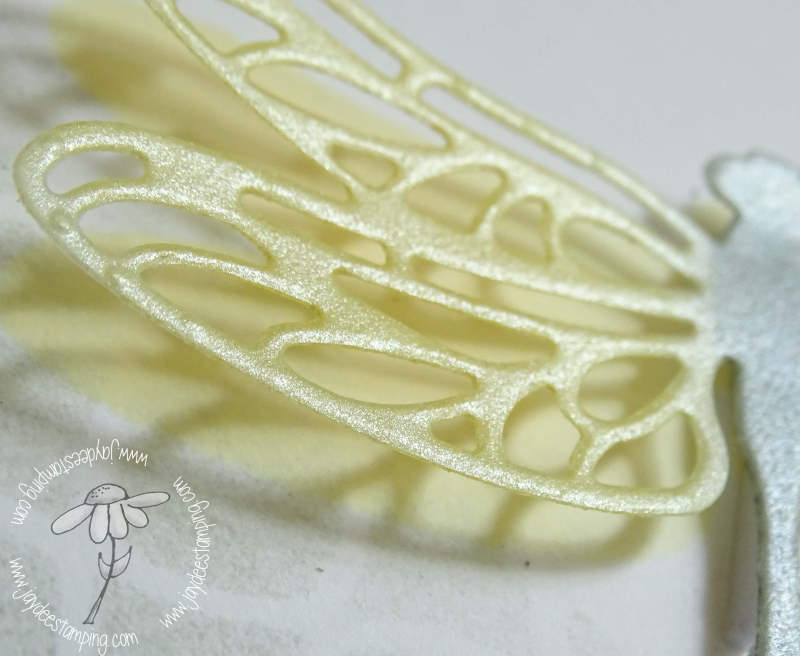 I really love the look of the vellum and it is amazingly strong.  The shimmer of the vellum also gives a luminescence to the dragonfly - an added bonus! 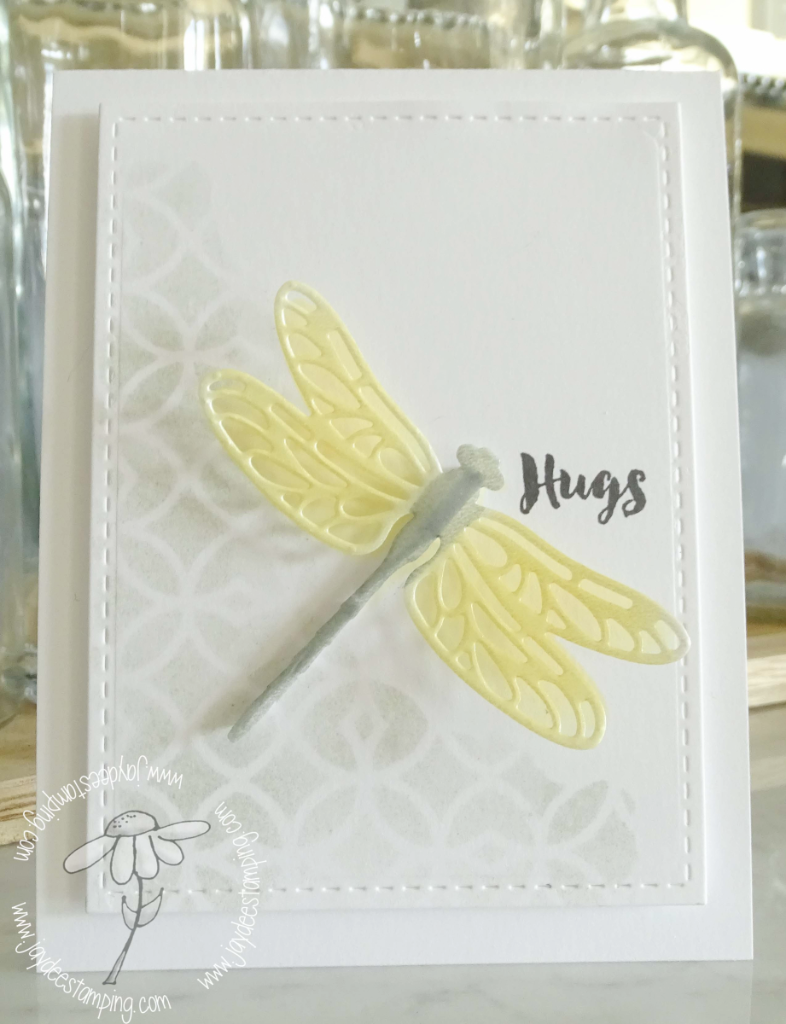 Oh.... it was a WONDERFUL day here today.  The Orioles arrived this morning - two males and a male Rose-breasted Grosbeak arrived a few hours after.   Our swallows are nesting in three boxes and a pair of Bluebirds look as though they are trying to nest in another box.  I LOVE this time of year, when the birds make their first appearance.   Luckily, we had gotten prepared this weekend in anticipation of their arrival, so we had food ready to put out for them at the end of their journey.  Mind you, we don't know if they are staying - or merely passing through.  Either way... they are very welcome visitors.

This photo is just for Jeanne :-)  My constant companion - he is never far from me - and had decided to take over the dinette chair - behind the lumbar cushion, where he could be warm and cozy. It's hard to believe that he has been with us for almost 7 years!     A long way from the little kitten that was found by Lou - abandoned in the middle of a corn field 20 miles outside of town - with his claws cut so short that he couldn't catch food.  When we got him home and took him to the vet - the vet calculated that he hadn't eaten in about 3 days and had been mistreated - with physical scars - and mental scarring.

Whoever dumped him had no idea what an incredibly smart, loving, playful and loyal little cat he is.  I am so happy they dumped him - and so happy we couldn't find a home for him and were forced to keep him.  He really is a little darling.

I'll be back tomorrow with another card I made this weekend.  In the meantime, warm hugs and prayers for those of you who need a little lift tonight.

Gorgeous subtle bg and a beautiful focal dragonfly!! Thanks for joining us at the Curtain Call :) Your kitty is adorable too!! So glad you took him in. Rescue cats are so appreciative of those who treat them well - we have had two and love them to death.

A wonderful dragonfly card. Yes, yellow and gray are so pretty and I love the shine you got. Thanks so much for the picture of Charlie. Truly, I am devoted to my dog, but love cats just as much and get my cat fix at my daughter's house. Fun to be mentioned by you and yes, I am devoted to you and your blog too! :)

How totally gorgeous! The soft stencilling in the background looks so elegant against the pretty dragonfly. A fab way of incorporating our challenge colours and a very stylish and eye catching result. Thanks so much for playing along with us at Less is More :)

Beautiful card. Love the dragon fly. I see a lot of them flying around here from time to time and the hummingbirds; well they keep me busy keeping them filled.
The birds around me hopped and played,
Their thoughts I cannot measure;
But the least motion which they made
It seemed a thrill of pleasure.
–William Wordsworth (1770–1850)
Enjoy your week.
Beautiful furry friend / companion you have. Thanks 4 sharing

What a beautiful cat! I think rescue cats show their gratitude with affection and loyalty. (We've had several over the years.)

The card is very pretty but what you write about Jeanne is beautiful!! You need not mention that you love her so much!!!

What a stunning dragonfly, the shine and dimension looks amazing and I absolutely love the soft bg, one of my favorites things in card making! Thanks for joining us at Less Is More!

Oh, how pretty! That dragonfly is lovely... the shimmery vellum looks very nice... also love the soft background! Thank you for playing along with us at the Curtain Call Inspiration Challenge.