Happy Sunday.  The team across at Inkspirational Challenges have a great sketch challenge this week.  It's very different and I was excited to play along. 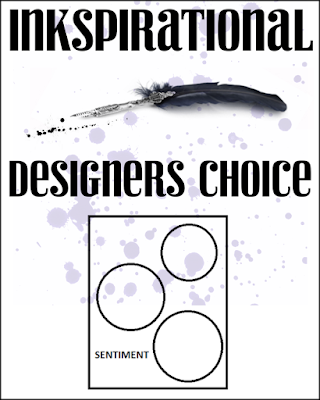 As soon as I saw the sketch, I had this idea spring into my mind.  It took a little playing around with the elements to make them work - but it turned out pretty much as I had hoped it would.

I'm still making cards for both Cards for Hospitalized Kids and Card Care Connection.  Both of these charities are doing wonderful things and I always feel inspired overtime I go to their pages.  I am trying to make as many cards as I can throughout the year now.

I began by stamping the Color Layering Koi into the three areas similar to the sketch.  I found the perfect sentiment in an Altenew set called "Be A Lighthouse".   Once the images were stamped, I took out my gold gel pen and added a little glimmer.  It's subtle, but really adds a little something-something.

The card looked good - but really wasn't photographing well and I realized that the fish were just kind of floating and missing something.   Then, I realized that my pencils could probably fix that problem.   I spent about 15 minutes with 6 different color Prismacolor pencils - and wow - what a difference the power of pencils can make.

Here's the card BEFORE I did some pencil work: 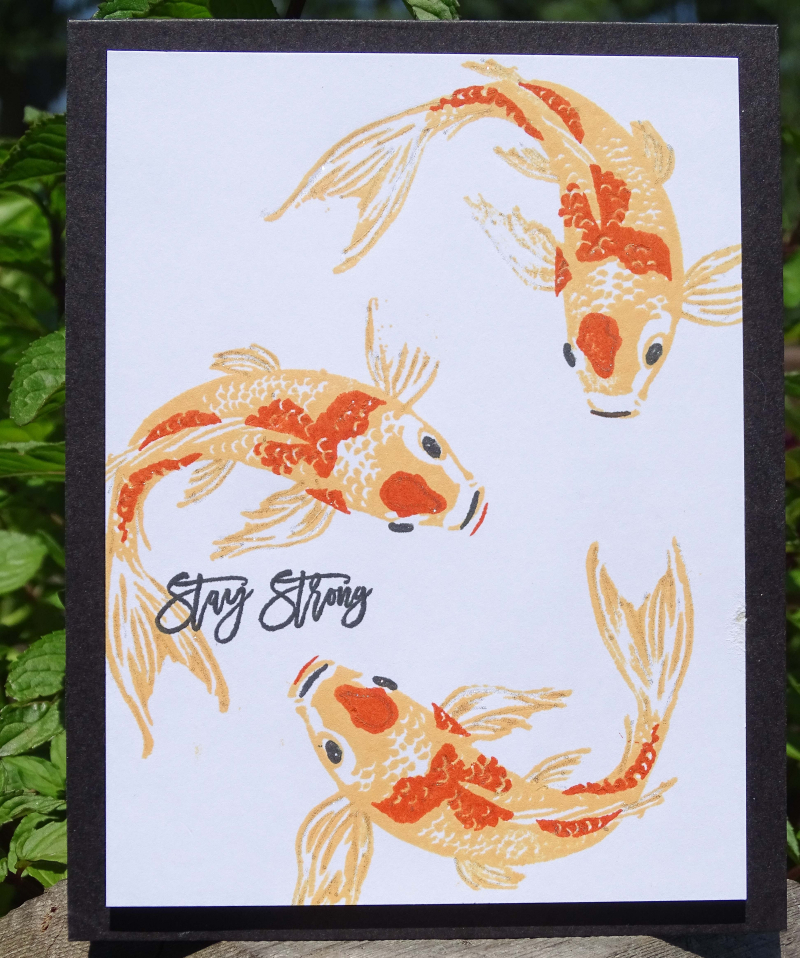 See what I mean..... it was only in the photograph that I realized it just didn't look the same as it did in the hand.....  So, here's the AFTER photo: 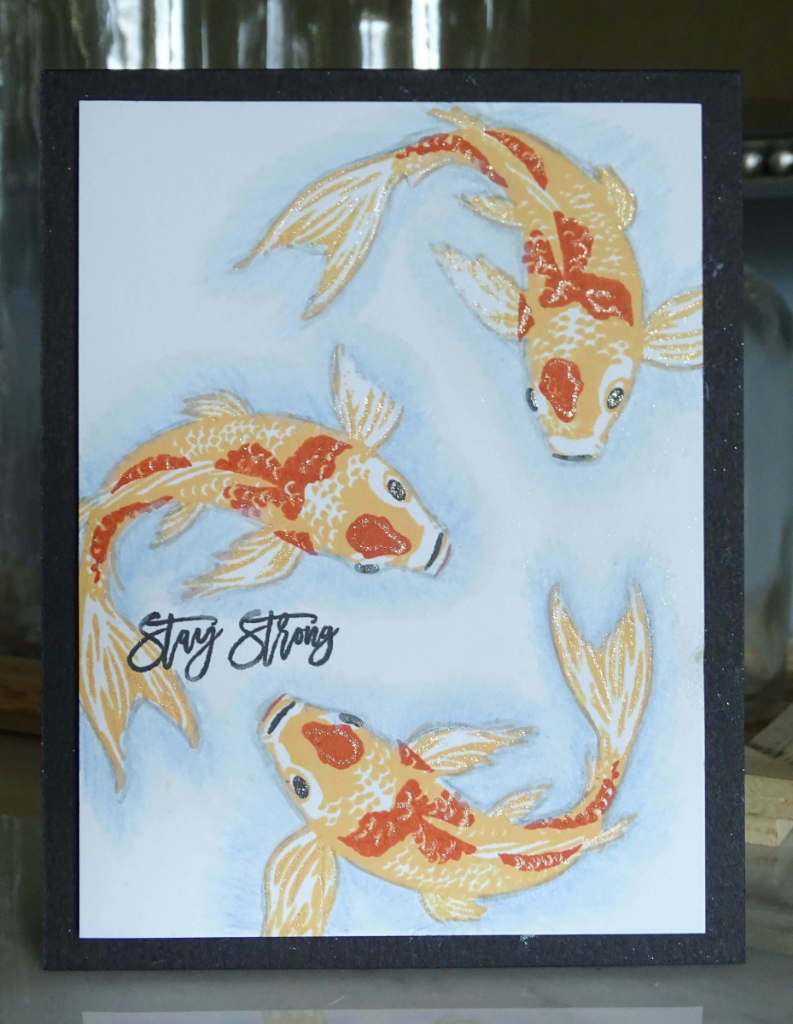 It's difficult to capture in the photograph - but you can see that the pencils give movement and life to the fish and they ground the fish.  The addition of the blue also makes the color combo more interesting.

Here's a closeup before the coloring: 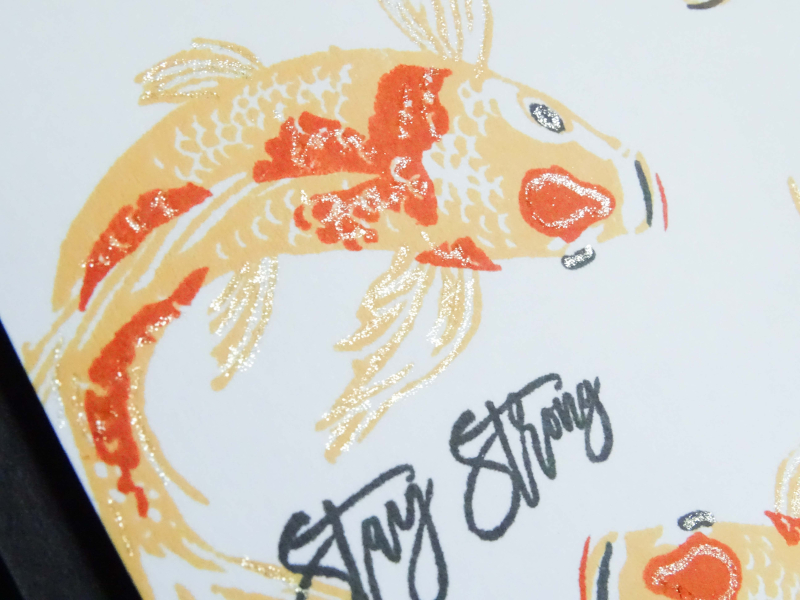 And here's the closeup AFTER the coloring: I did go in after I had take the AFTER photos and erased the pencil that had strayed over the edges of the sentiment to make it cleaner.   Also, I used Neenah Solar White and there is very little tooth in the paper, so the end result wasn't quite as smooth as it would have been if I had used a different base.  But.. as I wasn't intending to do any pencil coloring, I didn't think of that at the time that I inked up the koi fish:-)

I love my Copics... but I am loving my pencils.  Ive been taken a little time each day to practice my coloring - and signed up for a pencil class this weekend.   What a difference that class has made to my understanding of the medium- and the papers.  I'll share some of that with you later this week.

OK... so.... it was all over the news yesterday that Minneapolis had a good chance of seeing the Aurora Borealis last night.   The solar storm was in high gear and I was so excited.   However, I didn't read about it until around 9.30 - otherwise I would have made Lou drive me to the Canadian Border!  So, I dragged him outside and we sat outside until 1am - just in case.    At 1am he really needed to get to bed as he had to be up at 6.00 this morning!    Well... I did see the Aurora in the middle of the night.  It was glorious - a wonderful shade of pink and the world looked magical and everything felt right.   BUT.... I woke up and realized I was just dreaming about it..... darn :-)   However, dreaming about it made me feel happy and I woke up in a great mood this morning.  Now, I still REALLY need to see the real thing!

Here's a photo of one of the visitors to our jelly feeder.  I really didn't know that finches ate fruit.... they come a couple of times a day.  They are pretty boring birds, but their coloring really does look as though they dipped their heads in jelly :-) 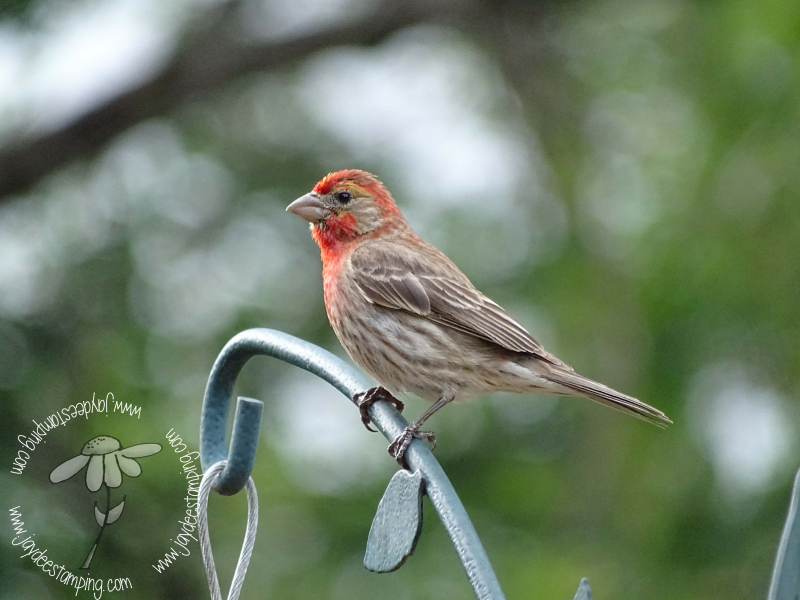 The immature birds are starting to find their way to the feeders as well.  Here's an immature male Baltimore Oriole 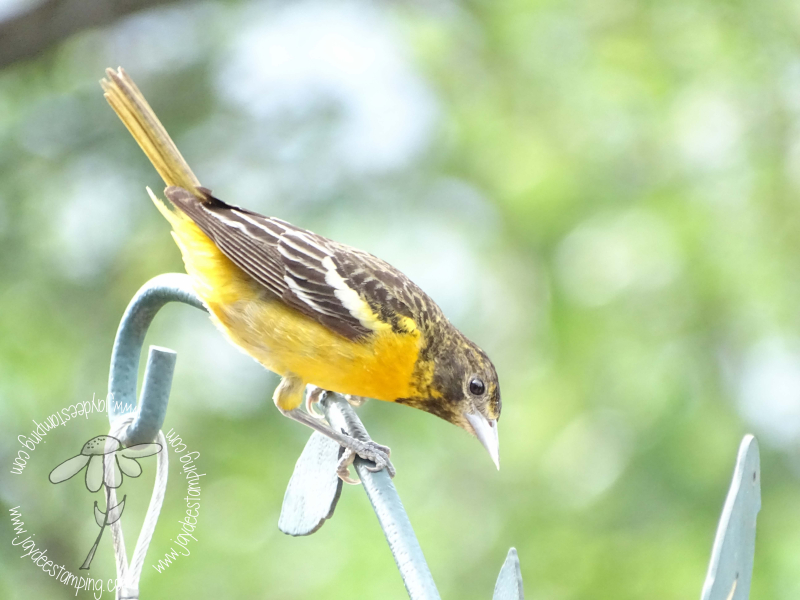 Not quite as handsome as he will be when he grows up.... but still a good looking guy anyway :-)

I'll be back tomorrow with another card.  In the meantime, warm hugs and prayers for those of you who need a little lift tonight.

I love this card! Such a creative design for the sketch and the fish with you coloring look great! Thanks for playing with us at Inkspirational!
Also, I love seeing your bird visitors. I have that red headed finch come to my feeder as well and I think that red head is so lovely!
- Shauna

Yes, you are right ...the pencil work changes this card from a beautiful card to an outstanding card! Wonderful.
Thank you for joining us at Inkspirational Challenges.

Jaydee this is gorgeous! The koi are beautiful and I love the colors!

Beautiful card. Love the coloring, shading, and the glittering adds so much. Have a happy day!