It's my turn to host our Paper Players challenge this week and here's my theme: 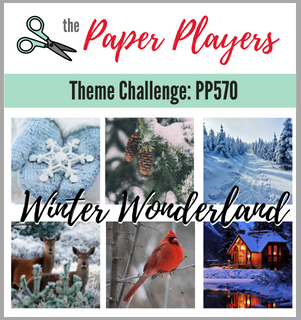 It's a perfect theme for today.  I'm looking out of the window and the world is a wonderful shade of white.  We had a good couple of inches of snow overnight and it really did look like a winter wonderland this morning!
For my card, I used an old Altenew set called Modern Deer.  I paired it with a set called Reflections from The Greetery.  I stamped and die-cut the trees twice and off set them a little to give dimension.  I also die-cut some snow drifts and placed my deer in the middle of them.  I used an old Simon Says Stamp snow stencil and some embossing paste to give the illusion of snow falling.
Here's my card: 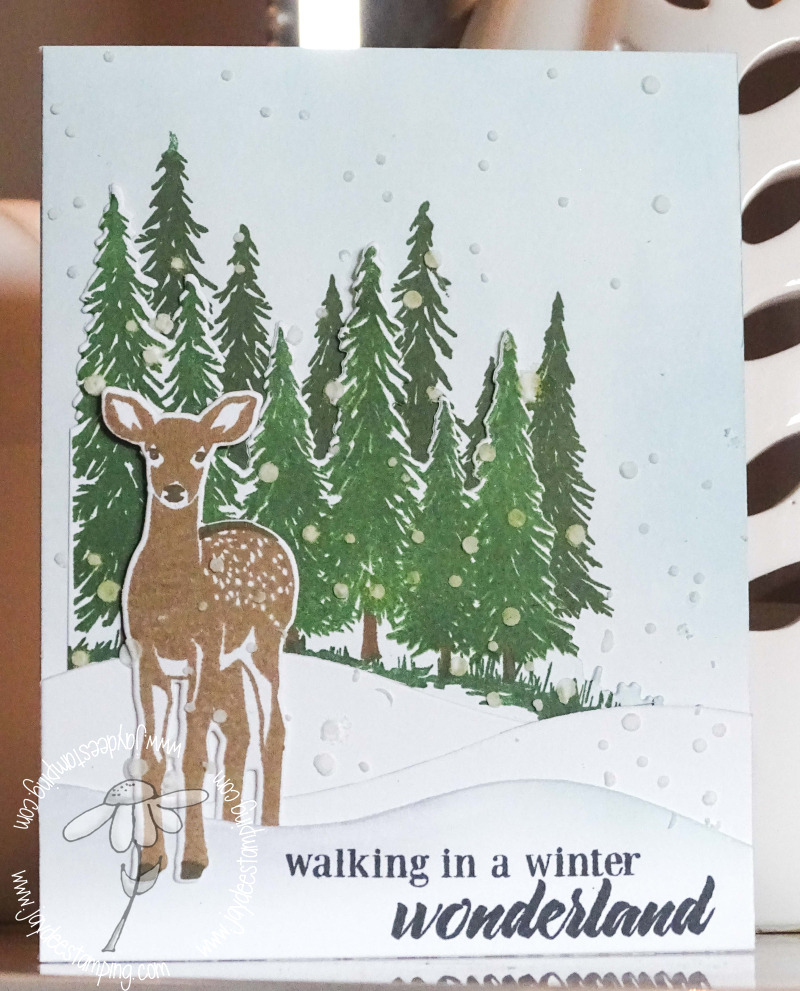 I hope you will join us and play along with our challenge this week.  As always, the design team have some fabulous inspiration for you:

Lou and I have just returned for a once in a lifetime trip - more about that later.  I did want to share a photo with you thought, to see if you can guess where we have been :-)  All you have to do is leave a comment on this blog post telling me where you think we were when we saw this!  You don't have to be right to win - all participants will be considered eligible for the draw (mmm sounds like something a lawyer would say! :-) )  Sorry it's not the best photo - but it was taken from inside a submersible and they have pretty thick windows! 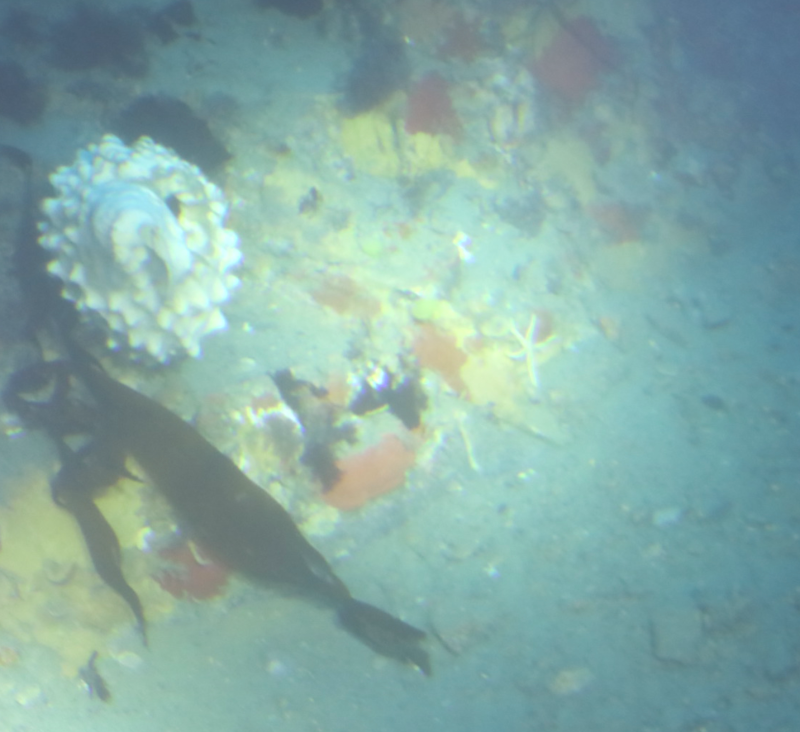 So, leave a comment - let me know where you think this photo was taken, and one of you will be receiving a little Christmas present of stamping goodies from me:-)  I'll take all comments for the next week!

In the meantime, here a couple of photos from our garden.

This one was taken just before we left.  A late straggler who was flying south with a bunch of grackles. 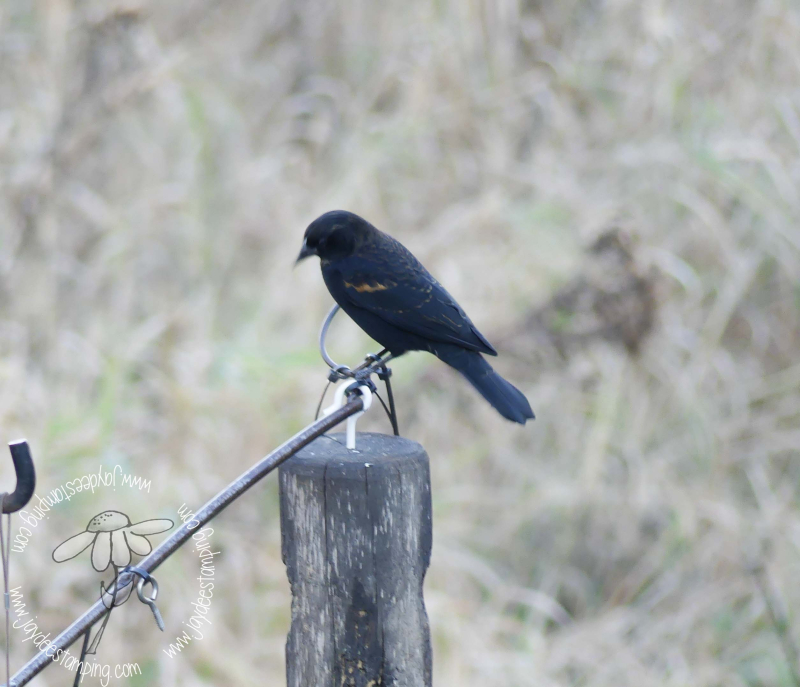 And these guys were soaking up the unexpected warmth in November in their favorite overwintering spot.  They aren't my favorite birds - but we generally only get them when they find the trees in winter. 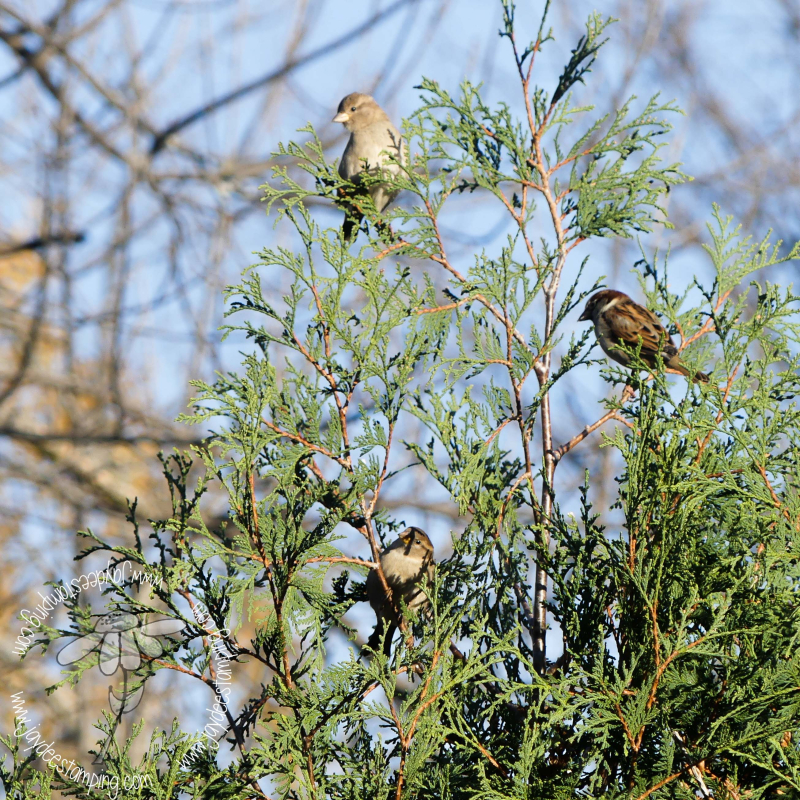 I'll be back later in the week with another card.  In the meantime, warm hugs and prayers for those of you who need a little lift tonight.

Jaydee, this is so peaceful and pretty! Your embossed snow is a beautiful finish to your scene.

No guessing on the trip as I know the answer - great photo though! Love your card - I was almost expecting a photo of the view from your window that had inspired it! Welcome back Jaydee!

I know where you went, so I can't guess...haha! I can't wait to hear more about your trip. Your card is stunning and the embossing paste is a wonderful detail. I'm a little jealous of your snow. It's supposed to be almost 90 here Friday. Crazy Texas weather! Have an awesome week, my friend! Hugs!

The embossing paste is so cool to show the snow falling! A very sweet winter scene that reminds me of my parents house. Thanks for a fun challenge this week and I can't wait to hear where you went! Looks warm and fun!

Snorkling in the Caribbean maybe. Your card says Christmas for sure. Lovely.

I have already said it but you have the most wonderful dies and stamps. I am in the midst of doing wraps for chocolates and lollipops for a bazar where I try to raise funds for charity work. Did you go to the Monterrey Aquarium? I do not remember if they have submersibles.

A beautiful card, Jaydee! I always picture deer in my winter wonderland, so your card tugged at my heart strings. I'm glad you enjoyed your trip! I can't wait to hear all about it, and see more pictures!

Awesome winter wonderland card Jaydee! I love your snowy hills and embossing paste snow falling down. As for your photo! Were you in the Florida Keys?

Your card looks exactly like what we woke up to here..with the deer even...lol! What a beautiful winter card!Glad you had a fun trip.