Today I have a sparkly card for you made using Ticker Tape background stamp and Opposites Attract from the Greetery.  I was inspired to do this because of Ann's choice for our Paper Players first challenge of 2022! 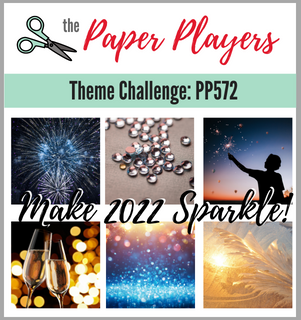 I didn't have a "sparkly" sentiment, so I had to add a much shimmer and shine as I could.  I embossed the Ticker Tape backgroud stamp with silver embossing powder, added a gold sentiment from the Opposites Attract set and then finished it off with some rhinestones - well a few of them :-)  As I no longer have glitter in my stash, this was about as sparkly as I could make it:-)  Here's my card: 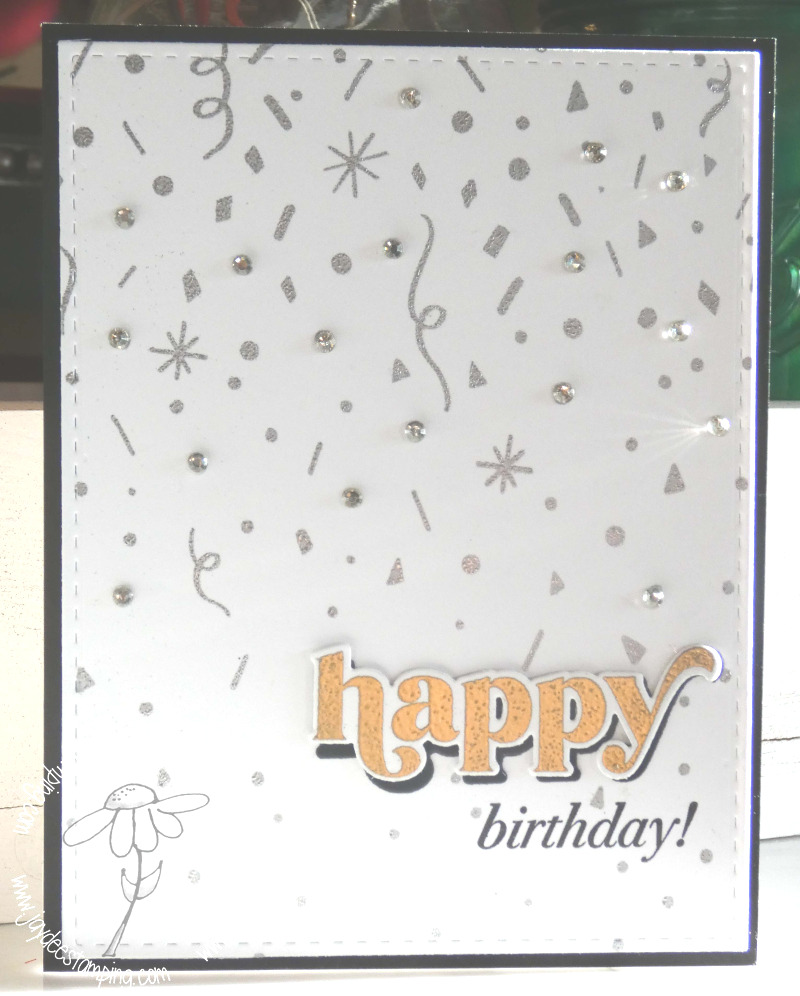 As this is the first challenge of 2022 - it is also time to welcome our talented guest designers for 2022.  Please welcome
Cindy Beach, Jennie Maier and Christy Stanford!
You can check out their sparkly creations, as well as the others from our design team on their blogs:

As it is so cold here today - down to -35ish - yes that would be MINUS 35.. I thought I would share a couple of photos from Antarctica - where it was MUCH warmer when we visited last month :-)

This little fur seal was as sleepy as can be when we came across him on Deception Island.  Deception Island is an old whaling station and retains some of the buildings that were last in use in thee 1930s.  It still retains some of the old buildings that were left after the last time the volcano was active in the late 60s.  Deception isn't actually an island, it's the caldera of an active volcano.  I must admit, I can't ever remember sailing into a caldera before!  Anyway, this guy was sleeping peacefully when we got there. 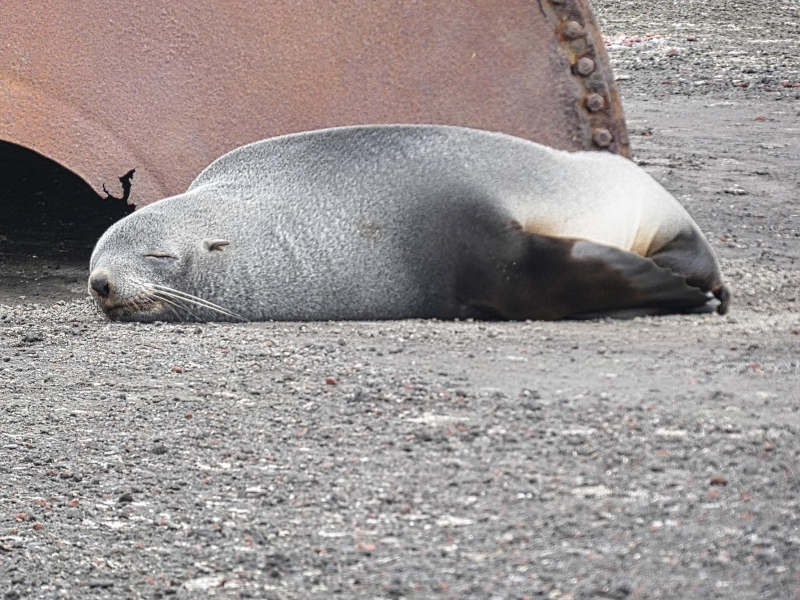 However, after 100 people decided to visit him, he was a little less sleepy, and keeping a beady out on everyone! He really was beautiful and it was great to see seals actually sleeping on the Island where they were once processed for their beautiful fur.  Keeping him company on the Island was an Arctic Tern I've only ever seen terns in tropical areas, so it was great to see their cold weather counterparts!  It was a very foggy, cloudy day when we visited Deception Island and I was struck by how melancholy a place it seemed.  Because of the destruction from the volcano eruption in the late 60s, there are many damaged buildings.  With the lack of light, I found it fascinating to photograph what was left of some of the structures.  The photos almost look like surrealist paintings and reminded me of a great South African artist called Keith Alexander.  He painted some of the most amazing surreal paintings of houses being taken over by the desert in Africa - and I think he would have appreciated these scenes in Antarctica. 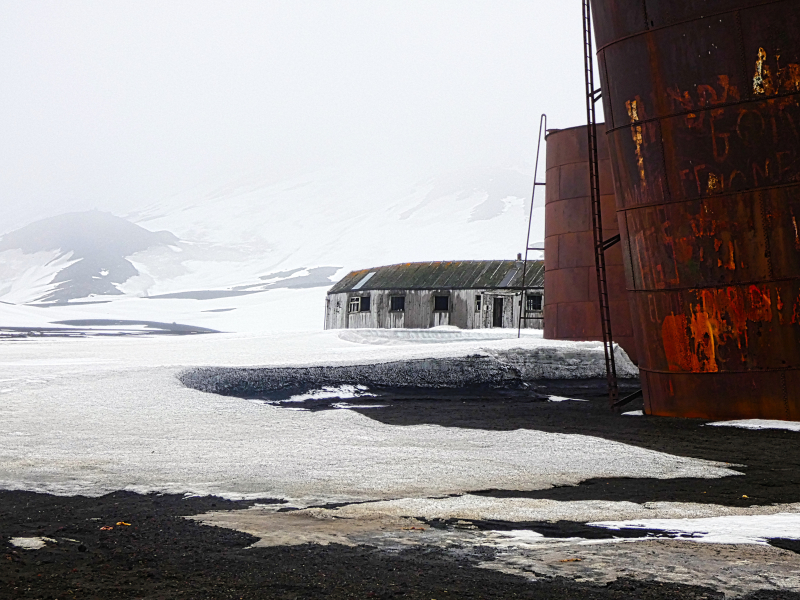 I just love the light in this photograph.  The rich rust colors of the old whale oil barrels is so surprising among the greys of the sky, the reflected snow and the black of the volcanic ash.  I felt the same way about the pyroclastic rocks - the red/orange almost looked as though they had been left behind from brick buildings, but there were none of those on the island, so I realized that this was red volcanic rock, with just a little touch of green from sea flora. 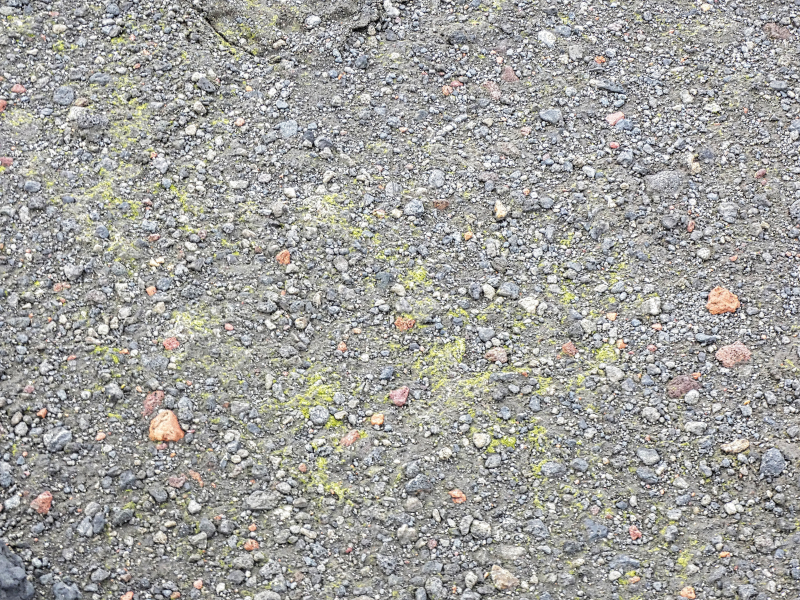 These two crosses standing alone on the caldera struck me as the loneliest place in the world to be buried.  Most of the crosses and graves were swept out to sea by the last eruption in the late 60s. 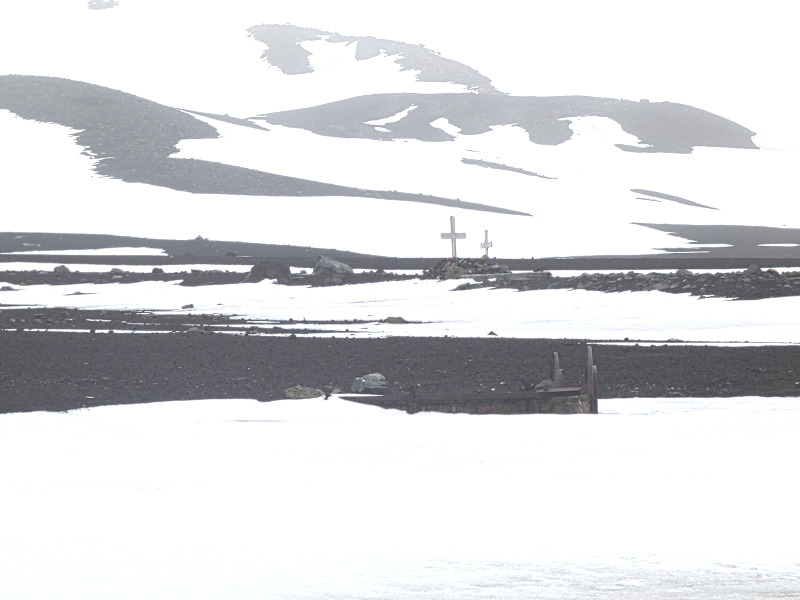 I'll leave you with one last photograph showing some of the damage to the buildings and structures.  You can see that I was still fascinated by the rusty red color.  After being in Antarctica for a couple of days, you realize there is are no warm colors.  It's all shades of black/grey/white and blue.  So the rust felt really intense in the landscape. I'm hoping to get into my craft room today to play along with some challenges.  If I do, then I will have some cards to share with you later in the week.  In the meantime, warm hugs and prayers for those of you who need a little lift today.

Claire, yeah... I can imagine that you wouldn't want to be that cold. The clever thing about the seal... because the island is an active volcano, you dig a couple of inches under the soil and it's nice and warm! So he was smart :-)
hugs
jaydee

Thanks, Ida! glad you liked the card and the photos :-) I just wish the photos could do justice to how beautiful it really is!
hugs
jaydee

Sorry to be late commenting on your card. I like the festive confetti stamp and the bold Happy Birthday sentiment compliments it well. - Wow those pictures from Antarctica are amazing.

Such a stunning birthday card, Jaydee! Love all of the sparkly detail. Your photos are amazing! Talk about a trip of a lifetime! Hope you are staying warm up there. It's supposed to be 31 here tonight (without the negative) and I'm already shivering thinking about it. Big hugs! :)

That ticker tape stamp is fabulous and looks great in silver with the rhinestones sprinkled throughout; with the gold embossed sentiment this card is full of CAS sparkle! Loving the holiday snaps too - such a wonderful trip!

I love this sparkly silver background! I have never seen that stamp before, it is amazing! Your gold sentiment is fabulous! Love the contrast. What a fantastic trip to Antartica! WOW! That seal looks about like me in the winter! HAPPY NEW YEAR, My Friend!

Oh, Jaydee! I LOVE the embossed background you created. The rhinestones are the perfect embellishments. You did a wonderful job with my "Sparkle" challenge this week! Your pictures from Antarctica are amazing. What a once in a lifetime experience!