Lest we forget - a personal In Memoriam

Happy Memorial Day and thank you to all of those who have served and paid the ultimate price to protect their loved ones and their country.

When I began my genealogy journey 20 years ago I was very aware that my father and my uncles Jim and Jack both served in World War 2.  All of them returned from battle, although none were the same when they returned.  However, they all did return to their families.  I was not aware of any other members of my family who had served in World War I or World War 2 - never mind wars that occurred before that.

I made it a mission to try to find out as much about the names added to my family tree as I could.  Over the years I have discovered multiple family members that not only served their country, but lost their lives defending it.

For a couple of years I have wanted to do a personal In Memoriam post to celebrate those family members that I never knew and many whose names have been lost to the family members who came after them.  Most of them resided in the UK but there is one who lost his life on the USS Arizona.

William 1938 - 1940 1st cousin 1x removed:  December 12/13 1940 saw the first major bombing blitz of my home town.  Little William was with his baby sitter and not with his parents.  The house he was at received a direct hit and he was killed.    William was just 2 years old when the German bomb hit the house he was visiting.

William Taylor - 1899- 1916 grand-uncle :  The story of William struck a major chord with me.  He wasn't even 18 when he died. William's name is one of 72,335 that appear on the Thiepval Memorial. Most died in the early days of the battle of the Somme. Most of the 72,000 plus are British soldiers and some from South Africa. William was just 17 years old when he was killed.   His older brother, Samuel, survived to return home to his parents.

Albert Pinder 1891 - 1917 - 3rd cousin 2x removed.  Albert was injured at the Battle Of Messines Ridges and died of his wounds days later.  He is mentioned at the Mendinghem Military Cemetery.  Albert was 26 when he died.

William Peavey 1919 - 1941 - 3rd cousin 1x removed:  Killed in Action on the 7 December 1941.  Thanks to the amazing record keeping of the US, we know a little about William.  Billy Peavey was an aspiring graphic artist and had been sending samples of his work. Right before the attack he was informed he had a position at Walt Disney Studios once he was discharged. William Howard "Billy" Peavey's brother, Robert Peavey, had been in the Navy before the war. He was a water tender aboard the USS Salt Lake City. After the attack he immediately volunteered and eventually served as water tender aboard LST 822 at the Philippine invasion, Okinawa and the occupation of Japan.  Billy was 22 years old when he was killed.

I wish I could find out more about those that lost their lives but, sadly, so little information survives.  There is a famous quote - one that was put into popular culture by none other than the great artist Banksy and it is one that struck a strong chord with me when I realized that many of these mentioned here died over 100 years ago.

"There are three deaths. The first is when the body ceases to function. The second is when the body is consigned to the grave. The third is that moment, sometime in the future, when your name is spoken for the last time."

I've posted this poem penned by my best-friend Pam a couple of times over the years.  It's called The Photograph.  I could only find two photographs for my cousins who were killed and I chose to use the one for Albert Pinder as he was born very close to where I was born and as this poem is written in Yorkshire-ese, I thought it appropriate.  And, although the poem is not about Albert, his image represents the millions of men who lost their lives in WW1 and WW2. 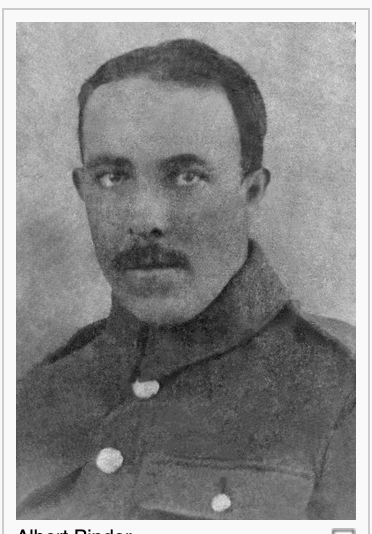 He didn't know his country only his street
never saw waves or fields full of wheat
he'd seen many canyons in the mines far below
as he shovelled the sweat with the coal
He worked hard for his supper this coal dusty man
Married my gran money already spent
moonlighting flits couldn't pay rent
Dossed down with neighbours on hard wooden floors
shared out the bread and the womanly chores
the pride slowly ebbed from this destitute man
Never went to church in borrowed Sunday best
but polished his shoes in his worn holy vest
waited on dinner pathetic pale stew
sat on hand me down chairs not long glossy pews
Yet he worshiped his own this unholy man
Saved by sirens war in France
Fair exchange arms for pence
smart in his uniform buttons shone bright
she stood on the pavement and waved him from sight
gone was the soldier a very young man
Still she yearns for her courageous young man
now sitting like stone pale and wan
he was framed long ago for his sweethearts mantle
he died in the war she lit him a candle
and cried for her Bill a very brave man.

What an awesome tribute and poem. My father and uncle both served in Korea and a cousin served in Viet Nam. Luckily for me all came home alive. My uncle is now buried in Wood National Cemetery (for vets and spouses) close to my home, my dad hated the army and is buried in a local cemetery next to his mom and dad. My mom and I have visited their graves every Memorial Day and other relatives (weather permitting) for over 25 yrs.

My dear Jaydee: Your family has paid a high price for liberty. May they rest in peace in God's Glory. I am with you and all who celebrate those passed away in this Memorial Day.

What a touching memorial, Jaydee. So interesting to hear about your family (and sad as well) and the poem was dear. TFS.