Hand in Hand for Festive Friday #110

It's another INSPO challenge across at FestiveFriday and it's another great day to celebrate - Friends Day!  This challenge inspired me to create a card for my bestie.  Pammie and I used to go for walks through the park when we were young kids and sometimes we were accompanied by her dad's dog, Trudy.  So, I used Hand in Hand from The Greetery and the Fir & Foliage stencils to create my card.

Don't forget - you don't necessarily have to follow the theme - you just need to make a project featuring 3 of the words from our INSPO list.  Here's today's list: 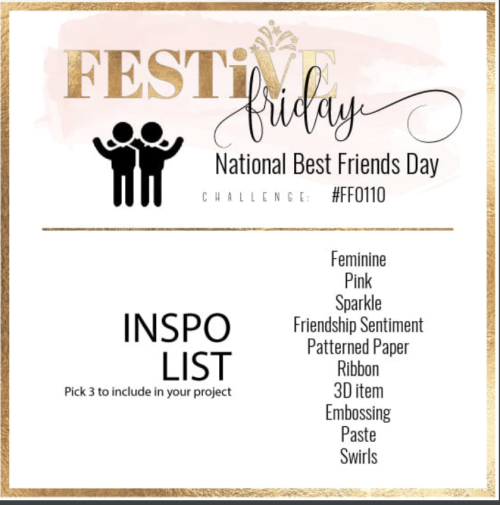 For my card I used feminine, pink, sparkle and a friendship sentiment - I mean, who doesn't want to thank your bestie for always being there when you need them!  I know you can't see it - but I added some glimmer onto the wet cobblestones and the umbrella 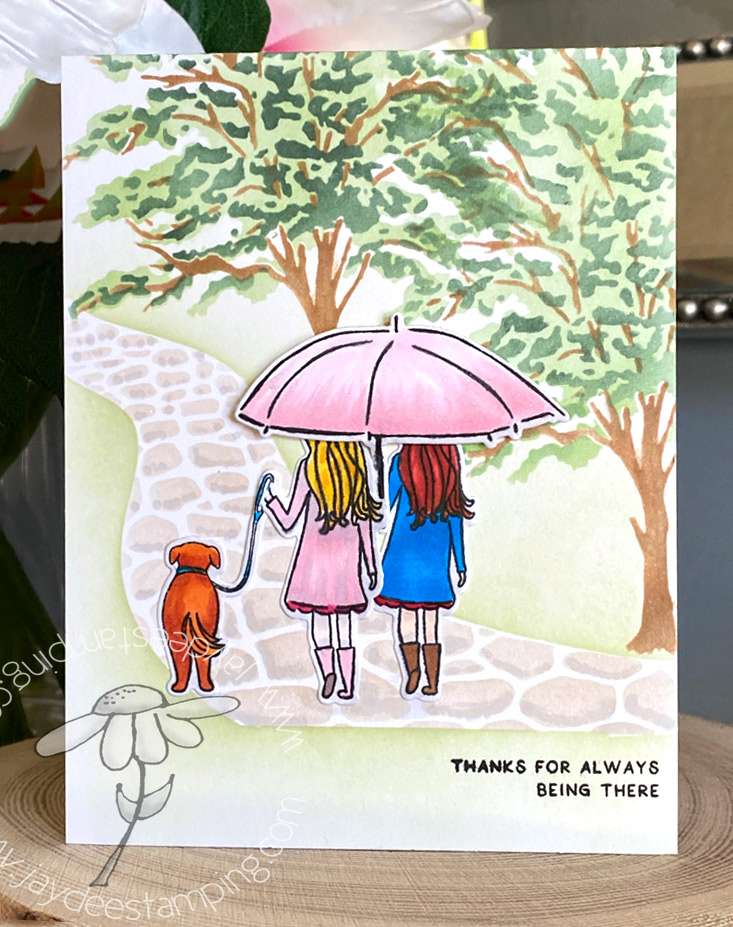 I hope you will join us and play along.  We would LOVE to see what YOU create.  As always, the design team have some fabulous inspiration for you:

When I made this card, I could have had no idea that things would happen the week that I posted it that would make me realize how grateful I am to have grown up when I did.  Yes, bad things happened, and we were always told to be aware of strangers, especially those in cars offering us lifts or sweeties, but when we went to school, we felt safe behind the walls of our scholarly enclave and the only thing we had to fear was earning the wrath of one of our teachers and getting detention or the cane.  Never, ever, ever, would my parents have sent me off to school in the morning thinking about the fact that we might not come home because some crazy idiot decided to take out 19 children under the age of 10.

The events this week reminded me of how I felt after the Sandy Hook shooting.  Shattered, angry, and despondent.  But, I had hopes that people would have been shocked enough that we wouldn't let it happen again.  This week, I was beyond angry.  No family should ever have to feel the pain of losing their child, even more so in this unimaginable way.  But, it isn't unimaginable!  It's happened before, so unimaginable is no longer an adjective that we should use to describe what happened.  It's unforgivable!  The discussion around children being killed in their classroom by a boy who is not even old enough to have a drink, but is old enough to go out and buy assault rifles  - plural - not singular! is not a political discussion - it's a societal discussion.  My heart breaks for those families.  It breaks for the surviving children who witnessed this and will never be the same again.  My heart just breaks for those kids who will never reach their full potential, who will never go to prom, college, have children, be free to make the choices they want to make.  My heart just breaks.  period.  I look back on this card that I created, and how happy I felt creating it with my head full of wonderful memories, and the era of innocence that allowed Pammie and I to go wandering around the park, on our own, and I am so grateful that we could live the life of freedom and a time when kids could be kids without having their life brutally cut short by some deranged idiot.

Tonight my thoughts and prayers are with the families of all those affected, the young children who lost their lives and the doctors and nurses who had to deal with their mortal remains.  May God grant them the solace they need to try to begin to deal with their loss.

Thank you Jaydee for sharing this beautiful card and thoughts. What you so eloquently expressed is how many of us feel but are unable to articulate. Hugs

Wow Jaydee. this is a great card. Your tribute has really touched me. Thanks

Love this card Jaydee - what a great little scene you created, so clever. I'm sure it will bring back memories for Pammie too! I'm so with you on the whole Texas shooting - it's tragic but with tighter gun controls it could have been avoided. I can only imagine the devastation to this community.

Wonderful card Jaydee, and the dog walking along side the two girls just makes it even sweeter!

Your card is sweet and beautiful and full of love. My heart is lifted by the tribute to your friendship and the age of having the freedom to be young and to be safe in a place like a school. My heart is broken for all the families who have lost their loved ones in these senseless tragedies. I work in a school and each drill reminds me of the seismic shift in our culture that makes them necessary. No person should own an assault rifle. What on earth could be the purpose of that but to destroy life. The list of these events is very long since Columbine. So many issues here. Sending a hug your way today.

What a sweet card, Jaydee! I love this image, and the memories of friendship it evokes. My heart breaks for the families impacted by the events in Texas. As a former teacher, it really hits home. Hugs...

I am with you on what you feel about what happened in Texas. I am with you and with the families who lost a child or one of the teachers. So sory, things like this should not happen nowadays, but they do.

What a great card!