It's the fabulous Joanne's turn to host our Paper Players challenge this week and it's color week.  There are so many great colors to choose from and I used them with a set from The Stamp Market called Wild Stems and use some of the hollyhocks that I had die-cut from The Greetery's Botanicuts Hollyhocks.  I also used a die called Curvy Borders - also from The Stamp Market and finished all of that off with the brick embossing folder from Stampin' Up! Here's a quick preview:

Did you see some of thee yummy colors that Joanne chose? 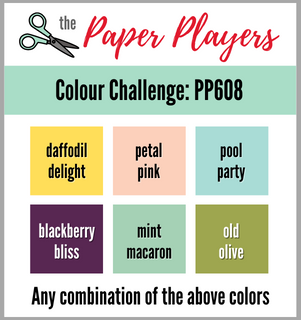 Even though Joanne said we could use any combo, I think I covered all of them. I even managed to sneak a little mint macaron-ish color into the detail in the middle of the daisy!  I didn't have blackberry bliss, but managed to get as close as I could.

I stamped and die-cut all the flowers and colored the hollyhock die-cuts.  I die-cut the curvy border from some 110# cardstock as I wanted that to have a little more heft than my normal 80#.  I assembled the base of the card and then arranged the flowers.  I stamped and die-cut the sentiment from A Note to Say set - also from the greetery and added that on top.  It was a little fiddly to put it all together, and this card has way more elements than I normally use, but I love the way it turned out. Such a wonderful selection of summery colors to choose from.  I hope you will play along with us.  We would love to see what you create with these colors.  As always, the design team have some fabulous inspiration for you:

Well, sadly my few days off come to an end today.  It was wonderful to switch off, turn off my work laptop and just do some fun things.  The weather has been decidedly fall like the last couple of days, but we have been advised it will be getting warmer again this week.  So, the green leaves on the rees outside our windows will be here for a little while longer - as well as the little humming birds.  Some of the leaves have started to change color, but for now they are mostly green.  I'll be back later in the week with another couple of cards.  In the meantime, warm hugs and prayers for those of you who need a little lift tonight.

Jaydee, I love everything about this card! Beautiful blooms and wonderful texture throughout. Of course, all of that pretty pink just makes me swoon...sooooo pretty!

Oh, Jaydee! This card is absolutely stunning. You incorporated the challenge colors perfectly. So much depth and texture. It's a card which will surely be treasured. Have a wonderful weekend!

Beautiful bouquet, Jaydee! You did a great job incorporating all of the colors and the embossed brick background sets off the flowers beautifully.

Jaydee, I just LOVE this card. The pink bricks and curvy border made me smile! The beautiful bouquet is just so pretty and the sentiment is lovely! I am so impressed your used all the colors! This card is just fabulous, My Friend!

Such a pretty bouquet of flowers, Jaydee! A reminder that summer still reigns, at least for a few more days! Just beautiful!

All the elements you used came together to make a beautiful card. Love it!

I just love this, Jaydee! Every detail adds to the whole feel of this beautiful card! The brick layer and curvy border are so elegant. Your hollyhocks look fabulous!

Jaydee this is beautiful! Love the embossing and the flowers! Have a great week!

This card is indeed a change from your more usual CAS style Jaydee, and it is truly fabulous! I love the detail of the layered blooms and the arched panel against the embossed brick is just lovely. So very fresh and pretty - you rocked my colour challenge this week!